Populist parties are often assumed to benefit electorally from major crises. Yet as Giuliano Bobba and Nicolas Hubé explain, populist actors have found it difficult to politicise the crisis brought on by the Covid-19 pandemic. Drawing on a new book covering the first wave of the pandemic in Europe, they identify several lessons concerning the effect of crises on the electoral appeal of populist parties.

Several authors agree that crisis situations are a precondition for the emergence and success of populists, or at least that they can favour them. While the impact of Covid-19 has not been the same around the world, in many countries the pandemic has been the biggest health, economic and social crisis since World War II.

Given the peculiar nature of the crisis, however, it is not obvious how populists can take advantage of it. Like other catastrophes or natural events, Covid-19 is difficult to politicise, that is, to become an arena for political confrontation between parties with traditional divides (us vs. others; elites vs. people), at least in its early stages.

In a new book, we have brought together contributions covering eight European countries that were affected in different ways by the pandemic (the Czech Republic, France, Germany, Hungary, Italy, Poland, Spain and the UK). Our study presents a comprehensive comparison of how populist parties in each of these countries responded to the first wave.

Table 1: Impact of the first wave of Covid-19 infections in selected European countries 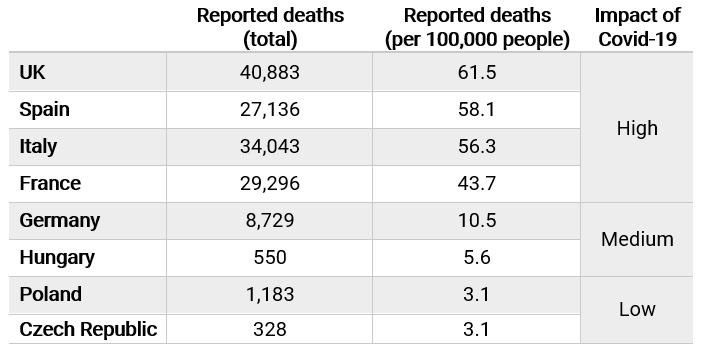 Note: The table includes figures from the start of the outbreak until 10 June 2020. Source: European Centre for Disease Prevention and Control

While populists sought to take advantage of the crisis, the impossibility of taking ownership of the Covid-19 issue has made it difficult to exploit the pandemic politically. In particular, populists in power have tried to depoliticise the pandemic, whereas radical right-populists in opposition have tried to politicise the crisis, but have largely failed to gain substantial public support. In what follows, we outline what we have learned so far and what we could expect in the next future.

Populists did not gain support during the pandemic

In terms of political support, as measured by voting intentions, populists have not significantly benefited from the crisis (Table 2). This is evident both in the short term, after the first wave (end of May 2020), and in the medium term (end of March 2021).

Table 2: Voting intentions for populist parties during the Covid-19 pandemic 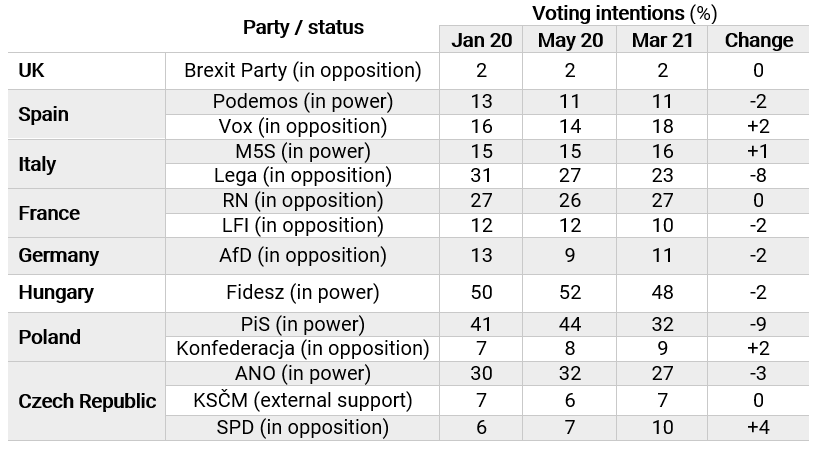 Although the success of populism is often interpreted as the result of an external crisis (i.e., economic, financial, political, migration, traditional values), this general pattern does not work when applied to the Covid-19 crisis. The peculiar nature of the crisis, as well as the implementation of similar policy solutions across European states, has largely prevented populists from using their usual proposals and rhetoric to gain centrality in the political arena and public support.

Our research found evidence that right-wing and left-wing populist parties reacted in different ways to the crisis. On the one hand, right-wing populism has identified new lines of conflict: an intensified emphasis on nationalism (and neo-natalism), and the (resulting) opposition of ‘we, the national people’, not only against the EU but also against some other member states. These findings confirm that even during the pandemic, right-wing populism is strictly intertwined with Euroscepticism.

Right-wing populist parties have been prevented from using their traditional appeal to the people as a basis for support and have instead emphasised the handling of migration issues. While in the Czech Republic, Germany, Hungary, Poland, Spain and the UK this included requests to close borders to reduce the risk of contagion from abroad, in France and Italy two right-wing populist leaders, Marine Le Pen and Matteo Salvini, accused governments of taking care of migrants instead of focusing only on nationals. On the other hand, left-wing parties (Podemos, La France Insoumise, and to a certain extent the Five Star Movement) did not use this kind of discourse. During the crisis, they were more focused on denouncing the lack of public investment in national health-care systems and the disastrous consequences of years of EU neoliberalism.

Being a populist in power or in opposition matters

Whether populist parties were in power or in opposition appears to have structured their discourse on Covid-19. Opposition parties attempted to politicise the pandemic at the end of the first wave, primarily blaming parties in power for their handling of the crisis, though with only partial success. No populist party attempted to politicise the pandemic in the manner Donald Trump did, by questioning the origin of the virus. The more marginal parties such as the Brexit Party, Vox, the AfD, and Konfederacja, have clearly radicalised their discourse based on nationalist, protectionist, and neo-nationalist agendas.

In contrast, parties aspiring to govern, such as the Rassemblement National, La France Insoumise, and Lega, have been much more cautious, focusing mainly on alleged government incompetence. On the other hand, the governing parties have tried to depoliticise the crisis using technical and scientific arguments and following the recommendations of national experts. For them, the crisis was an excellent opportunity to show their political competence, managerial skills and dedication to the people. A typical case is the Czech Prime Minister, Andrej Babiš, who emphasised his ability to govern the country through the crisis with the same success that he had achieved in managing his businesses in the past.

Again, a difference seems to have emerged between the left-wing and right-wing populists in power. Podemos in Spain and the Five Star Movement in Italy, as members of coalition governments, have based their political action on the advice of scientific and technical committees, while emphasising the need for more public investment in health care. At the opposite end of the spectrum, right-wing populists in power in the Czech Republic, Poland, and Hungary have primarily used scientific arguments to justify their political decisions, emphasising their leader’s ability to make informed decisions solely on the basis of the authority of their political leadership.

While populist actors often operate as ‘crisis entrepreneurs’, most of them have been unable to exploit the pandemic. Evidence suggests that populists benefit more from a situation of continual complaint against new contradictions than from the actual outbreak of a crisis such as Covid-19, or, worse still, from a solution to it, such as Brexit in the case of UKIP.

As crisis entrepreneurs, populist strive to fuel a permanent crisis cycle. This is, in fact, the condition that allows them to take full advantage of crises in terms of political centrality and voter support. Of course, as already mentioned, not all crises are the same. Populists take ownership of the contradictions that best suit their view of society. The quest for this crisis ownership is what feeds the continuous process of naming, blaming, and claiming of systemic contradictions that populists implement as a political strategy.

The pattern typically begins with the emergence of a political contradiction, triggered by populists. The next step is for this contradiction to be publicly recognised as a relevant problem, before being exploited by populist politicians, who then push it toward becoming an actual crisis. Finally, populists do not limit their focus to a single contradiction, but instead trigger this cycle for all contradictions they identify at a given time. The initial phase is when populists can benefit the most from a crisis while in the final phase, the climax, the contradiction finds a solution or a compromise that weakens the issue.

During the pandemic, all political actors suddenly found themselves in the final phase, where a crisis had broken out and a solution had to be found. This is the worst condition for populists because citizens perceive problems as real or experience them directly. Political responses must be rapidly implemented. At these critical junctures, disputes and polarisation often leave room for forms of political collaboration or non-hostile, tacit agreement in the name of national solidarity. However, as soon as this state of emergency ends, populists begin to implement the permanent crisis strategy again, fostering the emergence of new contradictions. This is exactly what happened in the eight countries we analysed between February and May 2020.

From the Covid-19 crisis to multiple crises: a new breeding ground for European populism?

In our view, crises per se do not necessarily favour populism. On the contrary, it is populists who fuel a ‘permanent crisis cycle’ that consists of a continuous search for ‘crisis ownership’ around stable or emerging political contradictions. The Covid-19 pandemic is an interesting case where populists were not able to obtain this kind of ownership at an early stage of the crisis. However, the consequences of the management of the pandemic – in health, economic and social terms – are multiplying critical situations that could lead to real crises in the coming months.

As we all know, unfortunately, the health crisis is far from over or under control. Covid-19 has entered the political routine and governments are oscillating between economic, public health, and preventive policy measures. Once in the coming months the first vaccination campaign is over, the situation will evolve to a new standard – far different from the previous one – in which the political struggle will take place and people will have to live. This normalisation of the Covid-19 crisis is likely to give opposition parties more opportunities to politicise the policies implemented by governments and possibly take advantage of the crisis. Populists in power and in opposition, therefore, will face opposite challenges, the outcome of which will determine the characteristics of European populism in the post-Covid-19 age.

For more information, see the authors’ accompanying book, Populism and the Politicization of the COVID-19 Crisis in Europe (Palgrave Macmillan, 2021)