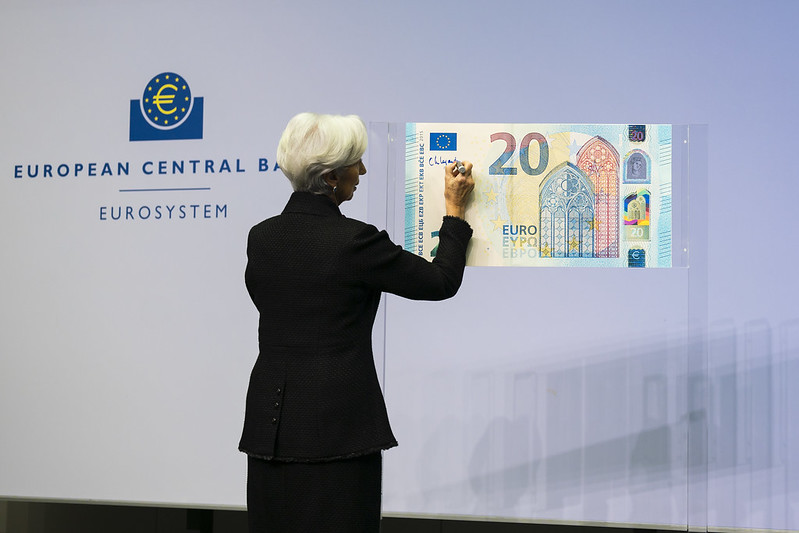 The European Central Bank portfolio is skewed towards the brown economy, reflecting a bias in the market. Can and should the bank deviate from the market allocation?

Climate change is a hotly debated issue in the European Central Bank’s ongoing strategy review. While ECB president Christine Lagarde and her colleagues at the centre favour robust tools to tackle climate change, most national central bank governors (like their colleagues at the US Fed) seem to be against including climate considerations in monetary policy. The core question is: should the ECB continue to accommodate the bonds and bank loans of carbon-intensive companies as assets or collateral, or should it reduce them?

In its quantitative easing programme, the ECB buys corporate bonds in proportion to their availability on the market. Carbon-intensive companies, such as oil and gas companies and car manufacturers, are typically also capital intensive and thus issue more corporate bonds. By taking assets proportional to the market, the ECB’s asset portfolio is skewed towards high-carbon companies relative to low-carbon companies. The carbon intensity (defined as carbon emissions divided by sales) of the ECB’s corporate bond portfolio is 57 percent higher than the average carbon intensity of EU companies. This large carbon bias makes the ECB a brown central bank.

Could the ECB address its carbon bias? There are broadly speaking three routes. First, the ECB’s primary mandate is price stability. If the ECB does establish that climate change has an impact on future inflation (eg through rising food prices due to droughts), it should be vigilant and prepare an appropriate monetary response to ease potential inflation pressures. Although the inflation impact of climate change seems to be remote, it is already part of the ECB’s monetary policy work to monitor this. Moreover, better modelling of the climate risk impact on monetary policy does not address the carbon bias in the ECB’s monetary policy operations.

Second, the ECB’s legal mandate states that it “shall support the general policies in the EU, without prejudice to price stability”. This refers to the ECB’s secondary goals. The transition to a low-carbon economy is a cornerstone of the EU’s general economic policies. The European Green Deal has a target of curbing carbon emissions by at least 55% by 2030.

The ECB can support the EU’s climate policy by cutting carbon emissions in its asset and collateral portfolio for monetary policy purposes. This second argument is the most compelling, especially were the European Parliament and Council to declare that the EU’s climate policy has priority within its general economic policies over the next decade(s).

Third, the ECB could include a climate risk assessment in its monetary policy operations. High-carbon companies are more exposed to rising carbon taxes, which increases the risk of write down for these companies. The haircut on collateral of high-carbon companies can then be increased. Again, risk assessment is already included in the ECB’s collateral framework. Moreover, climate risk is a major issue for the ECB’s supervisory and financial stability tasks. A climate stress test of the Dutch banking sector, for example, indicated that losses could amount to 4%-63% of core capital for a €100 to €200 per ton carbon tax.

In sum, the climate change debate in monetary policy is first and foremost about the ECB’s allocation of monetary reserves to high-carbon companies. The question is then which approach could reduce this allocation?

A medium tilting approach can reduce carbon emissions in the central bank’s corporate and bank bond portfolio by over 50%, offsetting the current carbon bias. Our paper shows how this can be done without unduly interfering in the smooth conduct of monetary policy. A key element of a tilting approach would be that the ECB would remain present in the entire market for eligible assets, which guarantees that monetary policy gets into “all of the cracks” of the economy. Tilting only increases the share of low-carbon assets at the expense of high-carbon assets, but does not exclude high-carbon assets.

If the ECB were to take on the challenge of greening its monetary policy operations as a secondary goal, it would be of utmost importance to do it fully independently. The ECB could adjust the eligibility criteria for assets and collateral in a general way, using a transparent and objective indicator, such as carbon emissions. The ECB should refrain from favouring specific projects or setting sectoral targets, which are issues for government policy.