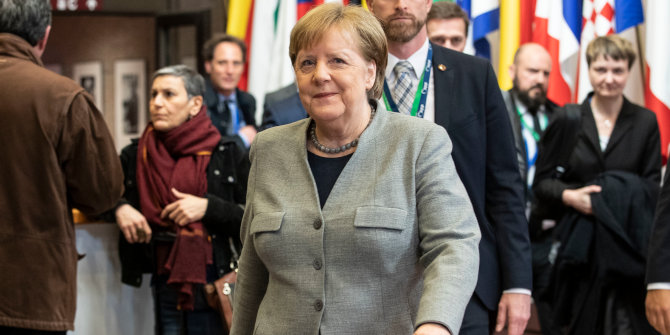 Germany will take over the presidency of the Council of the European Union today. Nele Marianne Ewers-Peters writes that the country will face the unenviable task of attempting to chart a path of recovery from the Covid-19 pandemic, while also addressing the numerous other issues and commitments confronting the EU’s member states.

As Germany takes over the presidency of the Council of the European Union today, it will be faced with the task of leading the Union out of crisis mode and toward a path to recovery. In this crisis-ridden EU, Germany will need to set the agenda and strike a clear balance between the many existing demands and expectations it now confronts, yet without emerging as the EU’s Zuchtmeister (disciplinarian) once again.

Even prior to the Covid-19 pandemic, Germany’s presidency agenda included negotiations over the EU’s Multiannual Financial Framework (2021-2027), reform of the asylum system and burden-sharing for incoming refugees, the Green Deal, which was introduced by the European Commission in 2019, and the negotiations over the EU’s future relationship with the UK. Moreover, tensions in the transatlantic relationship with the US, an EU summit with China, and on-going sanctions against Russia linked to the Ukraine conflict form another list of priorities and responsibilities that will need to be tackled sooner rather than later.

With the spread of Covid-19, however, the winds have turned. Germany’s Ambassador to the EU, Michael Clauß, has already expressed concerns the country will not be able to implement its ambitious programme and that it will have to primarily focus on the economic and financial recovery from the pandemic. What has become clear is that Germany, as Europe’s economic giant, will have to act as the balancer and broker among the other member states, their demands and expectations. Only by navigating through the EU’s diverging interests and addressing the risk of general fragmentation will Germany be able to move the EU closer to a community of stability and solidarity.

Covid-19 has changed Germany’s priorities and the ensuing crisis will have a significant impact not just on the German presidency, but on the ‘trio’ of presidencies over the next 18 months that includes Portugal and Slovenia. During the last decade, it has become clear that in times of crisis, EU member states tend to turn inwards to ensure their own well-being. Solidarity is cracking under the strain – and not only among the more Eurosceptic countries.

Germany’s key task will be to create and implement a well-structured recovery plan that will allow all member states to benefit equally. While southern European countries, particularly France, Italy and Spain, have been among the hardest hit by the spread of Covid-19, they were also experiencing economic problems before the pandemic. Indeed, Covid-19 is just the latest in a long list of developments that have placed the EU in an almost permanent crisis mode. The refugee and migration crisis, as well as the fallout from debates over the rule of law in Hungary and Poland, have all demonstrated a lack of solidarity that is once again clearly visible. Germany’s presidency is thus likely to be dominated by crisis management initiatives.

At the same time, the EU must bolster its position internationally. Its response to Covid-19 will be balanced against the need to maintain cooperation with both China and the United States as the Union’s key trading partners. As China and the US have clashed over the outbreak and have ongoing disputes over trade and other geopolitical issues, the EU has a clear incentive to underline its status as a strong and global actor. Germany’s EU presidency was supposed to lead the Union towards a stronger global position and greater stability, but it is now expected to focus on stronger solidarity among the EU-27 and facilitating a speedy recovery.

Balance as the way forward

The only way forward for Germany during its EU presidency will be to balance its commitments and priorities. First, finding a balance that can accommodate the other EU member states will be key to avoiding fragmentation. Some member states are more affected by Covid-19 than others and new dividing lines between southern, northern and eastern members have emerged. Only by balancing these competing demands and building on Angela Merkel’s cautious and goal-oriented approach can Germany hope to ensure the stability of the Union in the long-term.

Second, it will have to balance its priorities, responsibilities and tasks. While the immediate priority is ensuring a speedy recovery from Covid-19, other long-term strategies cannot be kept out of sight. The Green Deal, the next Multiannual Financial Framework, maintaining economic and fiscal stability, and the EU’s foreign policy and external relations will all have to be on the agenda in some form. To meet the ambitions set out by the Commission in 2019, all actors will have to pull together.

For a speedy return to normality, cooperation with external actors will be vital and here, again, balance will be key. Other crises, such as tensions in Ukraine and instability in the Mediterranean, have not vanished. Germany and Europe will be best served by balancing their relations between the East and West: fostering the transatlantic relationship with the US is key for Europe’s security, but it must also maintain good relations with China as one of its main trading partners.

As the agenda-setter for the second half of 2020, Germany carries a heavy burden. Achieving a speedy and equal recovery for all EU member states is a question of unity and solidarity. But if Germany is able to balance its commitments and demands, the EU can emerge as a stronger and more stable Union.