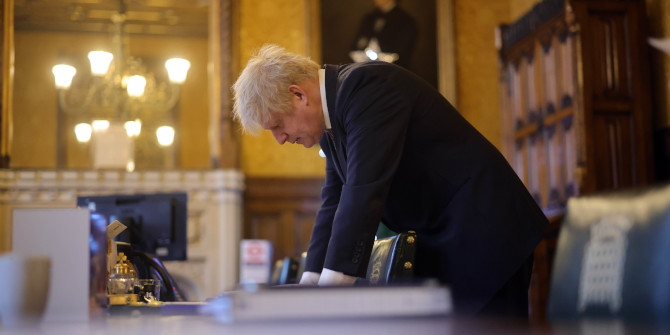 There are now only two weeks remaining for the UK and the EU to secure a post-Brexit trade agreement before the current transition arrangements expire. John Ryan writes that whichever way Boris Johnson and his government decide to move next, it seems inevitable the process will do irreparable harm to the UK’s interests.

Zugzwang is a situation in chess in which a player is under the obligation to make a move and in which any move available makes their position worse. Because chess players are forced to move alternately, a player in zugzwang has no option but to cause their own position harm. Guided by its red lines and hard Brexit stance, Boris Johnson’s government has manoeuvred itself into a zugzwang situation.

The main expected economic consequences of a looming no deal Brexit are that WTO tariff levels will be applied to UK exports to the EU, mostly around 5%, but 10% for automobiles, which will render UK production in this sector uncompetitive, and lead to plant closures. Looming also are devastating 40-90% tariffs on exports to the EU from sheep and cattle farmers.

Consequently, EU and international enterprises that include parts from the UK in their supply chains will switch away from the UK. The UK as a location of choice in Europe for foreign direct investment in the manufacturing industry will start to be eroded by other more attractive locations in the European Union. Big international manufacturers wanting to avoid disruption to their supply chains may move elsewhere in the EU.

There are already labour shortages in the UK, for example in the NHS, agriculture, and construction. This problem will be exacerbated with skilled labour choosing other locations in the EU. There will be a further, already ongoing depreciation of the pound, reducing UK living standards, and a probable credit rating downgrade. That will push up inflation, making the country poorer. While lower rates should boost consumer and business borrowing and spending, it will probably also mean a further weakening of the pound, making imports more expensive and pushing up the cost of living even more.

A smaller economy means fewer tax receipts, which means less money in government coffers. Prime minister Boris Johnson has suggested he will spend tens of billions of pounds that the government does not have on everything from extra expenditure on defence to building a bridge from Great Britain to Northern Ireland. Markets will probably take fright – pummelling the pound yet more and making it even harder for people to make ends meet.

The UK has benefitted from respect worldwide as a place of common sense, governmental competence, a sound legal order and trustworthiness. This will be shattered, in favour of an alternative image that has long been lurking in the background, that of an unreliable partner.

The Johnson government’s reckless hard Brexit stance is also putting the union of the United Kingdom at risk. The warnings are already there. Support for a second Scottish independence referendum will grow with a no deal. Support for the reunification of Ireland will also grow as a no deal Brexit leads to renewed border controls. The EU is amazed at how Johnson’s government can be so cavalier in its attitude towards Scotland and Northern Ireland.

A no deal Brexit would mean a hard border across the island of Ireland. This would now be a border between the UK and EU – and the bloc could not guarantee that goods would not be smuggled into its market if the border were open. Now, the economies of Northern Ireland and the Republic are intertwined. People and goods – particularly agricultural ones – cross the invisible frontier frequently, often many times during their production process. If border controls are imposed, both economies will be severely damaged.

While there are many factors, the UK government is ultimately fully responsible. It wanted Brexit. It created the chaos. It created the delay. It has not done the preparation. But most of all, Johnson’s government is vastly incompetent and has limited understanding of the country’s relations with the EU or experience of trade negotiations. Very few if any of the current Cabinet ministers would have made it into Margaret Thatcher’s or Tony Blair’s cabinets. The idea that in the real world it takes time, expertise and competence to make things work has clearly not occurred to them. And that is why they are to blame and no one else is.

The failure of the UK over the past four years is to realise why the whole Brexit process has been so painful – it is the balance of power of the UK population at nearly 67 million against that of the EU at 447 million. Even without the UK, the EU has a single market comparable in size to that of the US or China. Britain has made a series of painful concessions – most notably by agreeing to a separate status for Northern Ireland, which will see customs checks on goods crossing the Irish Sea, effectively dividing the United Kingdom.

The rhetoric from the UK government under Boris Johnson has been uncompromising, ready to put the fragile peace in Northern Ireland at risk, but this approach also reveals its ignorance to the wider implications of this stance. The uncomfortable truth is that the repercussions of this reckless approach would be much wider than UK-Ireland and UK-EU relations. It would put the ‘Global Britain’ vision and with it its centre piece of a US-UK free trade agreement at risk before it has even come to life. The only certainty is that whichever way Johnson and his government decide to move next, it will cause irreparable harm.