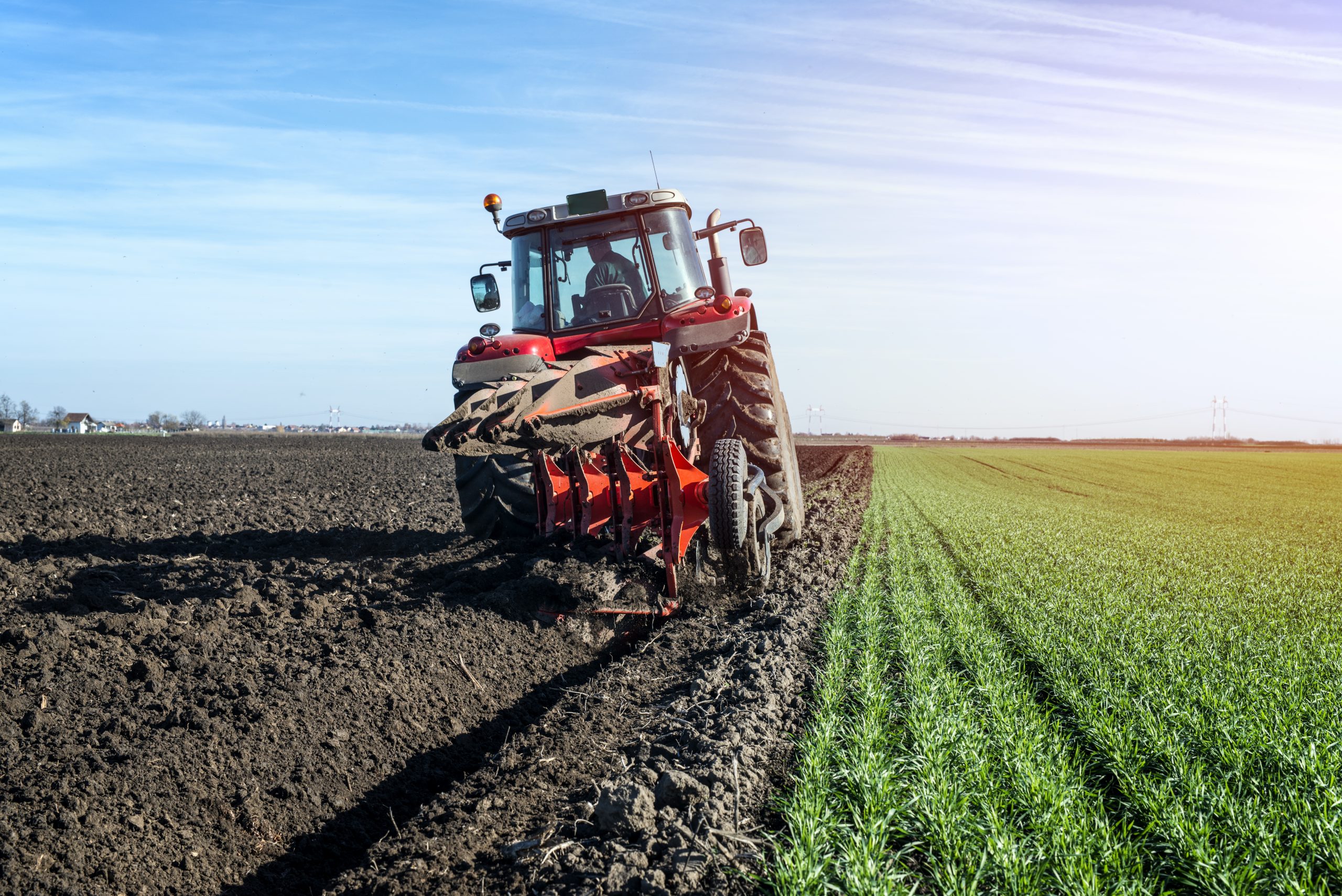 Preparations for the next funding period of the Common Agricultural Policy (CAP) are in full swing. The member states have drawn up national strategic plans, which must now be approved by the European Commission. Stefan Becker and Regina Grajewski argue the strategic plans reveal a considerable amount of diversity in the national implementation of the CAP, which could prove to be a double-edged sword.

The next Common Agricultural Policy for 2023-27 will build on national strategic plans. These plans lay down how the EU’s member states seek to contribute to the CAP’s ten objectives by providing analyses for their agricultural sectors and rural areas, identifying corresponding needs, and designing appropriate support measures.

We have analysed the strategic plans, primarily in terms of their financial allocations, to provide an overview of the national choices for the next CAP. The caveat is that the plans are still in the approval process and thus subject to change. However, the general direction of the strategic plans is likely to remain.

One of the most striking observations in our analysis is the considerable amount of diversity in the national implementation of the CAP. A first example can be found in the system of ‘conditionality’, which is a set of rules that must be followed when applying for direct payments under the first pillar or for area-based payments under the second pillar. While the relevant CAP regulation defines the general nature of these rules, the specific design is up to the member states.

Our analysis indicates that member states plan to make extensive use of discretion and derogations. In the end, there is a complex political landscape of varying rules regarding, for instance, the establishment of buffer strips along water courses or the provision of a minimum share of agricultural land devoted to non-productive areas or features.

Direct payments in the first pillar are another example. As Map 1 shows, the member states attach quite different weights to decoupled payments; payments coupled to specific sectors, productions, or types of farming; and the new eco-schemes that shall support agricultural practices benefitting the environment, the climate or animal welfare.

Decoupled payments still dominate, but their share ranges from 81 (Austria) to 49 percent (Malta). Coupled payments, meanwhile, vary from 34 percent (Malta) to zero percent (Netherlands). The types of livestock and crop production that are supported through coupled payments are manifold; mostly cattle farming, dairy cow farming, protein crops, cereals, and fruit and vegetables, but also many more, the most “exotic” perhaps being silkworms (support offered in Greece and Romania). 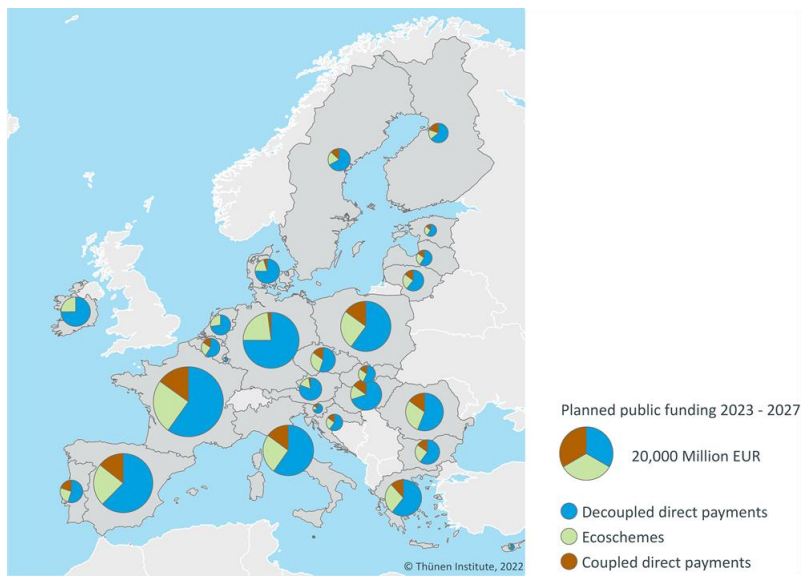 Interestingly, eco-schemes witness the smallest variance. The member states are generally obliged to reserve 25 percent of their direct payment funds for eco-schemes (which are optional for farmers). Roughly half of them are slightly above this minimum, with the Czech Republic reporting the highest share (30 percent). The other half remain below 25 percent, making use of the option to offset measures with identical purposes in the second pillar that exceed a certain threshold.

In terms of content, however, eco-schemes are another sign of diversity in national CAP implementation. The EU refrained from defining any kind of positive list, so member states were, within certain limits, relatively free to design their eco-schemes. And it shows. The diversity is “quite impressive”, to quote country experts from 15 member states. Most of the schemes are dedicated to climate, water/soil, and biodiversity, with specific rules in each member state. Some also address animal welfare measures and organic farming. The level of ambition varies greatly, from integrated production schemes to so-called ‘dark green’ measures with strong environmental benefits.

A third example concerns the second pillar. There are a few ringfencing requirements, most prominently that 35 percent of EU funds must be used for environment and climate-related objectives; but member states enjoy considerable discretion when allocating their funds (which, in the second pillar, include national co-financing). As a result, different foci emerge at the national level, as Map 2 shows.

Some member states have large shares of agri-environment-climate-measures (e.g. Ireland, Austria, Finland, Germany and the Netherlands), others plan to spend much on investment support (e.g. Malta, Hungary, Portugal, Estonia, Bulgaria and Denmark), but with different focus areas (e.g. competitiveness, environment, local infrastructure). Italy and France, in particular, make extensive use of the second pillar to support their agricultural risk management systems. Add to that the specific national idiosyncrasies for each type of measure, and diversity in the second pillar becomes enormous. 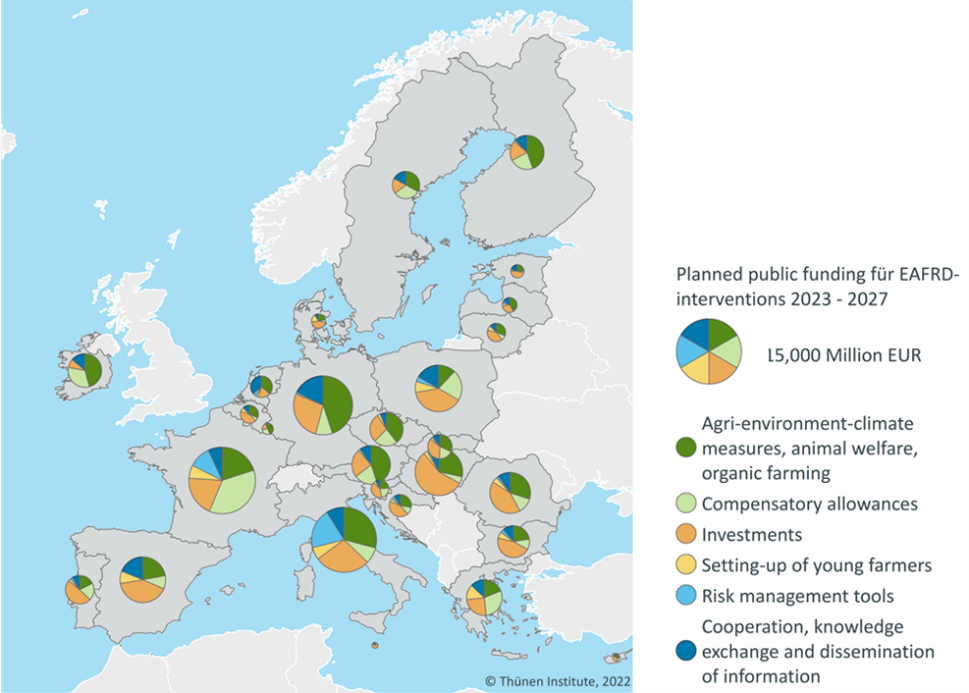 Finally, national diversity is not limited to instruments, but also pertains to objectives. As most instruments do not fall neatly into the CAP’s objective classification, we instead differentiate between eight target areas. As Figure 1 shows, strengthening agricultural income remains the dominant target area. Resource protection, gaining in importance, comes second. Mostly determined by the EU, this hierarchy can be found in each member state, though with different levels of emphasis.

Given ringfencing requirements, generational renewal, i.e. support for young farmers, is also pretty constant across member states. Beyond that, heterogeneity prevails. Some member states, for instance, focus more on rural development than others. Planned support for animal welfare and organic farming also varies, as does the weight attached to cooperation and training as well as to investments to strengthen competitiveness in the agricultural sector. 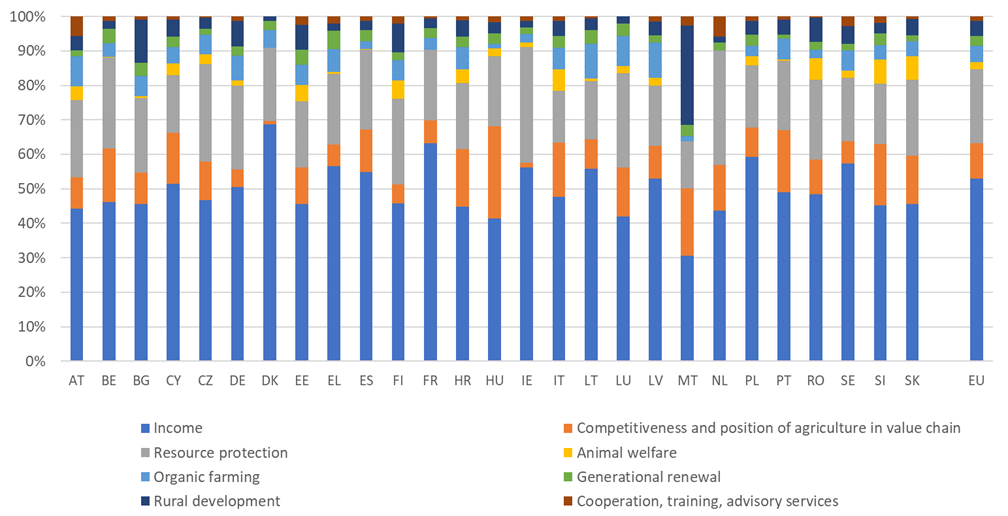 Source: Compiled by the authors.

These examples show that the next CAP will be marked by significant diversity at the national level. This can be a double-edged sword. On the one hand, as the relevant CAP regulation argues, “enhanced subsidiarity makes it possible to better take into account local conditions and needs […], tailoring the support to maximise the contribution to the achievement of Union objectives”. It is true that previous funding periods have partly been too prescriptive, especially when it came to measures in the second pillar, and some more subsidiarity can thus be welcomed.

On the other hand, too much subsidiarity may undermine common objectives. National discretion in designing conditionality can, for instance, be seen as a possible hindrance to more environmental ambition. It will thus be a challenge for the Commission to strike the right balance between subsidiarity and common objectives with the member states during the plan approval process. In the longer term, too much national diversity may also cause confusion about what the CAP is ultimately for, which could further damage its legitimacy. Policymakers will thus have to reflect on how ‘common’ the Common Agricultural Policy should actually be.

Stefan Becker is a Researcher at the Thünen Institute of Rural Studies, Germany.

Regina Grajewski is a Researcher at the Thünen Institute of Rural Studies, Germany.