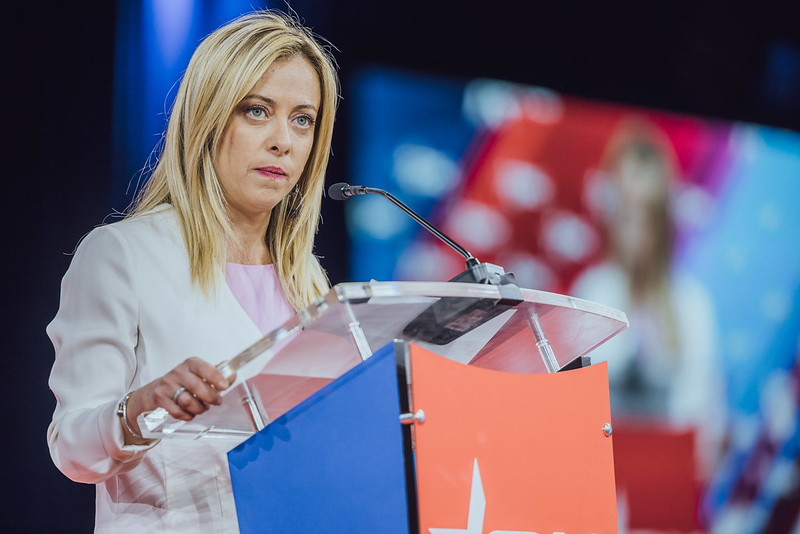 Giorgia Meloni, the hard-right leader who has just been elected as Italy’s prime minister, has a history of pro-Russia sentiment. At a time when her Fratelli d’Italia (Brothers of Italy – FdI) party is poised to form a government, some fear that she will orchestrate a radical shift in the country’s foreign policy.

While Meloni has recently reiterated that Italy must ‘loyally support’ Ukraine and remain united with the EU against both Putin’s Russia and Xi Jinping’s China, inconsistencies with her previous stances make it difficult to take her comments at face value. Does Meloni’s election mean Italy is about to regain its previous reputation as a friend of Russia and China from within the EU?

In reality, Meloni is unlikely in the short term to depart too wildly from common EU and transatlantic policies vis-à-vis Russia and China as she consolidates her power. Italy, after all, has consistently aligned with Brussels’ decisions.

However, with Italy’s economy facing a cost-of-living crisis and Meloni’s coalition partners, Matteo Salvini and Silvio Berlusconi, well known for their closeness to Russia, the country’s stance may indeed change in more subtle ways.

Italy as an EU Trojan horse

Historically, Italy has been seen as a ‘Trojan horse’ for Chinese and – especially – Russian influence. The country has been consistently viewed as one of the leading advocates in the EU for dialogue and cooperation with Russia, a position that has sometimes caused it to face criticism from other EU Member States. That the whole electoral campaign was marred by accusations of Russian interference – through espionage, disinformation, and illegal party funds – supports this view.

What has made Rome so friendly over the years is not so much its cultural and historical links with Moscow, which are founded on the myth of Moscow as ‘the Third Rome’, the Italian Communist Party’s historical closeness to the Soviet Union, and past and recent musical and artistic exchanges but rather, Italy’s desire to play a strong ‘mediator’ role and do business with a powerful and friendly energy provider. This has been the true driver of Italy-Russia relations.

While Meloni has distanced herself from Russia since the start of the invasion by underling her solidarity with Ukraine, this has not always been her position.

Echoing the Kremlin’s conservative narratives, in her 2021 autobiography ‘Io Giorgia’, she defines Russia as ‘part of our European system of values’ and a ‘defender of Christian identity’ fighting Islamic fundamentalism. She has condemned EU economic sanctions against Russia on numerous occasions from 2014 to shortly before February 2022, arguing that Italy should defend its businesses from Brussels’ damaging policy.

Meloni’s ‘new Atlanticism’ may be part of a genuine evolution towards more moderate positions in a cynical effort to enhance her ‘mainstream credentials’ and portray her party as composed of moderates who are fit to govern. This raises questions about what foreign policies she might adopt in the future.

Meloni may also be influenced by internal factors and, particularly, the pro-Russia stances of her coalition partners.

Berlusconi famously has a strong friendship with Putin and, in an interview released just days before Italy’s election, claimed that the Russian president ‘just wanted to replace Volodymyr Zelensky’s government with “‘decent people”’, causing a national and international outcry. Salvini, like Meloni, has been accused of receiving illegal Russian funds, and has continued to criticise sanctions, arguing that they are ineffective and that they harm Italian businesses.

Underscoring this, on 14 October, Lorenzo Fontana, the ultra-conservative and traditionalist League politician known for his pro-Putin sympathies, was duly elected Speaker of the Chamber of Deputies.

If anything, the coalition is more likely to take a tougher line on China than Russia. Berlusconi has often expressed fears about Beijing’s rapid political and economic rise, recently arguing that European countries must protect themselves from China. He also claimed that communism brought countries ‘only poverty, terror and death.’

Salvini has also expressed concerns over China’s economic and possible military expansionism. High-level League politicians such as Gian Marco Centinaio and Marco Dreosto have backed and travelled to Taiwan on several occasions.

When the League-Five-Star Movement coalition signed a memorandum of understanding on the Belt and Road Initiative (BRI) in March 2019 – the only G7 country to do so – Salvini, then Italy’s deputy prime minister, warned against the risk of China ‘colonising’ Italian markets and reportedly refused to meet with President Xi during his 2019 visit to Rome.

Following on from this, Meloni’s tough stance on China already seems to be taking form. In September, she suggested that she would tackle ‘unfair’ Chinese trading practices that the FdI insists damages Italian manufacturers.

More than her partners’ sympathies, however, economic interests could be the key factor in shaping Meloni’s foreign policy. She has presented herself as the so-called defender of Italian ‘interests’, interests that are being compromised by a growing sense of ‘war fatigue’ and high energy prices. Confindustria, Italy’s main industrial association, has estimated that gas price increases could cost Italy 3.2 % in GDP growth and 582 000 jobs in 2022-23.

If utility prices – and, subsequently, voters’ discontent – rise too much, Meloni might be tempted to offer Russia concessions, such as active opposition to any new rounds of EU sanctions, in exchange for cheaper gas through bilateral negotiations. She could also potentially form an alliance with Hungary, the most Russia-friendly EU Member State. Meloni’s coalition partners would likely favour such an approach.

But fears of a radical change in Rome’s foreign policy are probably overstated. Italy’s choices are unlikely to ever completely contradict its most powerful partners because the transatlantic alliance remains a cornerstone of the country’s strategic thinking.

However, a burgeoning cost of living crisis and tensions within the coalition may offer small cracks that the Kremlin might be tempted to exploit. Given the current political climate and economic uncertainty, Meloni’s victory is the best outcome the Kremlin could have possibly hoped for.