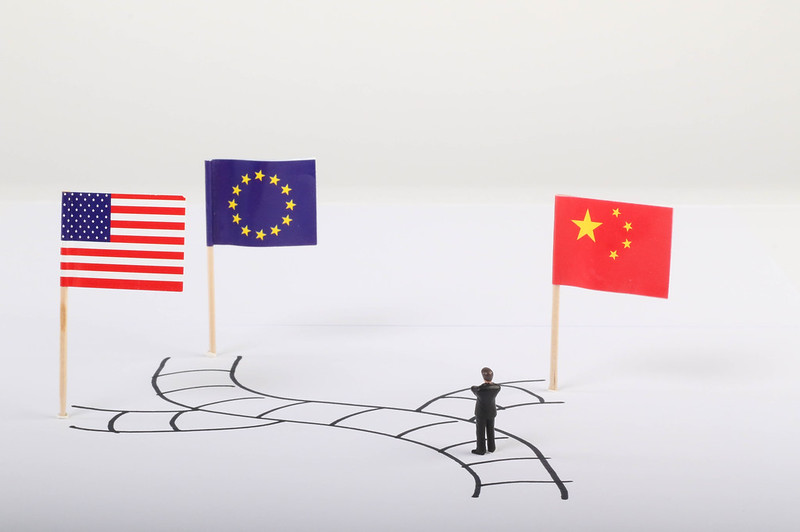 Despite incoming US National Security Adviser Jake Sullivan expressing disappointment about EU Member States’ decision to move forward with the Comprehensive Agreement on Investment with China in December 2020, the EU’s expectation of consultation was not reciprocated when the US unilaterally withdrew from Afghanistan this summer. Shortly afterwards, the launch of the EU’s Indo-Pacific strategy in September was overshadowed by the bombshell formation of AUKUS.

These developments buttress the case for greater European strategic autonomy, particularly in the wider ‘Indo-Pacific’ theatre, which is increasingly becoming the focus of global attention. However, the path towards increased EU regional influence will be anything but easy.

This seeming shift from balancing China’s rise to an outright effort at containment compounds the dilemmas flowing from Washington’s regional posture, in which preserving US primacy is an end in itself. The Biden administration’s goal of pursuing ‘responsible competition’ will probably be difficult to square with high-profile standoffs over Xinjiang, Hong Kong and Taiwan. Rightly or wrongly, China’s refusal to entertain any criticism on these issues highlights its desire to be treated as an equal arbiter of the international order.

Shortcomings of the EU’s Indo-Pacific approach

Beyond the perception that the EU is an outside player (Europe being the only continent not to have a coastline on either the Indian or Pacific Oceans), there are two significant obstacles obstructing a robust and more positive-sum European ‘third way’ between the US and China.

First, the trade-security binary will prove difficult to navigate. Many Europeans may contend that a trade-centric approach provides a useful complement to Washington’s more defence-oriented priorities, strengthening the collective impact of the transatlantic partnership in the Indo-Pacific region. However, the US may also perceive a European strategy placing trade and growth ahead of security as inadvertently cementing China’s central position in regional affairs.

Alternatively, the EU could emphasise military muscle. Security and defence already prominently feature in the Indo-Pacific strategy, with Operation Atalanta offering a successful precedent of European engagement on this front. Moreover, the Indo-Pacific’s inclusion within the recently tabled Strategic Compass, a document which aims to ‘set out a common strategic vision for EU security and defence for the next 5-10 years’, is non-negligible.

However, it remains difficult to foresee the EU playing a security role in maritime Asia that comes anywhere near the capabilities of the US or China. According to some military forecasts, a kinetic clash over Taiwan is a distinct possibility over the next five years, long before the EU will manage to bolster its regional presence.

Thus, regardless of which dimension of the Indo-Pacific strategy Member States choose to emphasise, questions will persist over the future of the transatlantic alliance. A division of labour, with the US supplying the military power and the EU taking responsibility for trade and growth, may appear attractive to Atlanticist-minded Europeans. But this will not eliminate Washington’s suspicions concerning Europe’s pursuit of a more independent regional posture, nor will it resolve the EU’s junior partner dilemma.

Europeans may content themselves with the Biden administration’s recent grudging and belated support for EU strategic autonomy in a fashion that is complementary to NATO, expressed as a means of defusing the AUKUS fallout with France. But assuming greater responsibility for managing security closer to home and developing the capabilities to project power into a vast Indo-Pacific theatre are two entirely different propositions.

Second, it is far from certain that the geographic expanse stretching from the Red Sea to Tasmania to the Bering Strait can be considered a single region, the ‘Indo-Pacific’. This is certainly true in the economic sense as well, with the deepening economic relationship between East and Southeast Asia not being replicated to the same extent with South Asia, illustrated by India’s decision not to join the (admittedly shallow) RCEP trading bloc. Overall, the shortcomings of the ‘Indo-Pacific’ nomenclature underscore the fact that the construct is, at its core, primarily political and security-related, and therefore ultimately non-inclusive.

The security sub-systems found across the Eurasian supercontinent are growing increasingly enmeshed. That AUKUS could engender a Franco-Greek security pact demonstrates how developments in one corner of Eurasia can impact the opposite corner. Multipolarity has allowed for a geographic widening of the space in which states consider issues to be securitised. However, this does not guarantee that a mega-regional community, based upon shared norms of considerable breadth and depth, can be forged.

On this front, a gap remains visible between Europe’s desired aims and Asia’s inherent pluralism. At last week’s Asia-Europe Meeting (ASEM) Summit hosted by Cambodia, while EU Council President Charles Michel spoke of wide-ranging notions such as the ‘rules-based international order’ and ‘Indo-Pacific region’, the Chair’s Statement made no mention of this contested nomenclature and referred only to the ‘rules-based multilateral trading system with the World Trade Organization (WTO) at its core’.

The EU’s adoption of an Indo-Pacific strategy does indeed mark an important step, providing Member States with an additional channel through which to exert regional influence. But if the ‘Indo-Pacific’ is little more than a shorthand for containing China, then the European understanding of the concept must be further fleshed out if it is to serve as an adequate tool for advancing the EU’s strategic autonomy, especially considering the ambitious time horizon set through the Strategic Compass.