Over the last two decades, the European Commission has attempted to build a reputation as an institution that listens to the general public. However, as Adriana Bunea and Idunn Nørbech explain, the Commission has also sought to maintain its credibility as an actor that prioritises expertise in its decision-making. Drawing on a new study, they illustrate how these twin objectives affect the Commission’s responsiveness to policy inputs.

The participation of stakeholders in the formulation of public policies provides policymakers with important opportunities to improve the information quality and democratic legitimacy of their decision-making. For modern executive bureaucracies and regulatory agencies, stakeholder consultations also offer valuable opportunities for reputation-building with external audiences.

In a new study, we argue that how bureaucracies respond publicly to policy inputs received in the context of stakeholder consultations provides relevant insights about their reputation-seeking behaviour. We explain why this is particularly the case for the European Commission, a powerful executive bureaucracy and regulator, which in 2015 initiated a broad reform of its Better Regulation policy and significantly expanded the opportunities for stakeholder participation in the formulation of EU policies across the policy cycle in an attempt to add a participatory layer to its world-famous technocratic, evidence-based, expert-informed policymaking.

Specifically, we assess why and how the European executive uses strategic communication and public responses to stakeholder policy inputs as a reputation-building strategy. This strategy allows the Commission to simultaneously consolidate its well-established image as a responsible, evidence-based policymaker while also cultivating a newer reputation as an institution that is responsive to public demands, with the aim of enhancing its institutional legitimacy, authority and power.

Building a reputation as a responsible and responsive policymaker

Research shows that in the context of increased contestation and criticism for being remote from the European public, the European Commission has made significant efforts in the last two decades to build a reputation for being a supranational institution that listens to both the public and affected interests.

One implication of this was the expansion and institutionalisation of its stakeholder consultation regime. However, this re-legitimisation effort came with the important challenge of having to tap into both old and new sources of institutional legitimacy and authority. As such, the European Commission faced the prospect of having to preserve its credentials for being an expert-informed, evidence-based decision-maker while also making a credible claim that its policies are formulated together and in line with the European public’s preferences.

We argue the Commission tries to address this challenge by engaging in a double reputation-building act. On the one hand, it aims to consolidate its core, foundational and well-established image of a responsible (evidence-based) policymaker, while on the other it aims to develop a newer and less established reputation of being more responsive to the public. We contend this has implications for the Commission’s public communication and engagement with stakeholder inputs which offer relevant reputation-building opportunities.

The Commission’s decision to consolidate its reputation as a responsible policymaker means that when replying to stakeholder inputs the European executive will prioritise their content and will publicly engage with those that are considered to be more evidence-based as opposed to opinion-based.

We argue these are also the inputs more likely to inform its policy decisions and outputs. The Commission’s decision to further cultivate its emerging reputation of a responsive policymaker is consistent with a pattern in which it prioritises the source of the input and the type of interest represented by the stakeholder providing it. In this scenario, the Commission is more likely to take on board policy inputs coming from stakeholders representing citizens and non-business actors.

We have tested our argument on a novel dataset recording information about 446 stakeholder policy inputs received as part of the legislative simplification programme (REFIT), and the European Commission’s public replies to these inputs on its ‘Lighten the load’ portal.

Our dataset indicated that 39.69% of stakeholder inputs received a public reply from the Commission, while 60.31% did not. Only 9% of them received a reply stating that they had informed the legislative simplification programme. Through qualitative text analysis, we coded the substantive content of stakeholder inputs and classified them into evidence-based (45%) and opinion-based inputs (55%).

Figure 1: Predicted probabilities of receiving a public reply from the Commission for evidence-based and opinion-based stakeholder inputs 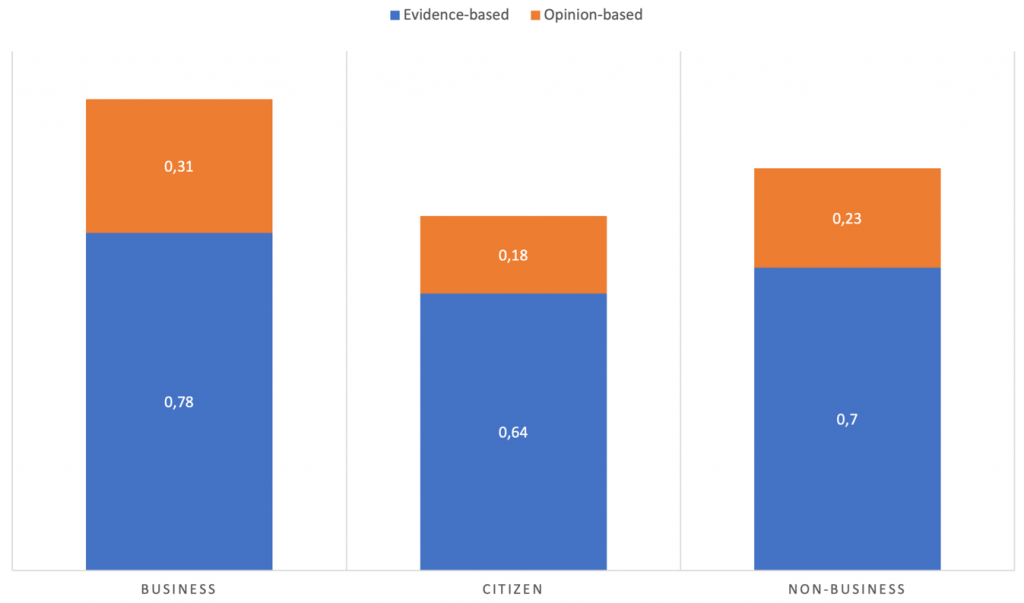 Note: For more information, see the authors’ accompanying paper in the Journal of European Public Policy

The results of our logistic regression analyses suggest that the Commission is significantly more likely to publicly engage with and respond to evidence-based policy inputs (relative to opinion-based ones), while also being less inclined to respond to inputs coming from citizens and non-business actors, compared to inputs provided by stakeholders representing business interests.

This is consistent with the image of a European Commission that is more interested in consolidating its core, foundational reputation as a responsible policymaker that is responsive to inputs aligned with the standards of evidence-based policymaking and less interested in cultivating a reputation of being responsive to the opinion-based inputs coming from the representatives of the European public broadly defined.

This is reinforced by the fact that evidence-based inputs are more likely to get public replies from the Commission, indicating that they informed the legislative simplification programme, although the effect is not statistically significant in the model accounting for a set of control variables.

Our study shows that much like EU regulatory agencies, the European Commission continues to make sustained efforts to consolidate its core reputation as an evidence-based policymaker. This is despite its use of initiatives such as stakeholder consultations to help cultivate an image as an institution that is responsive to the public. This finding diverges from existing literature arguing that bureaucracies have incentives to use strategic public communication to protect their newer, emerging and less established reputations when facing public criticism and contestation.

Instead, the Commission seems to continue to protect and consolidate its core reputation as a responsible evidence-based policymaker in the context of its regulatory simplification programme. We think this ultimately shows the importance of foundational institutional reputations and the enduring importance of evidence-based policymaking for maintaining the Commission’s institutional uniqueness in the context of the regulatory EU state.

For more information, see the authors’ accompanying paper in the Journal of European Public Policy

Note: This article gives the views of the authors, not the position of EUROPP – European Politics and Policy or the London School of Economics. Featured image credit: © European Union, 2022

Adriana Bunea is a Professor of Political Science in the Department of Comparative Politics, University of Bergen, and a Fernand Braudel Fellow at the European University Institute. She is the PI on the ERC Starting Grant CONSULTATIONEFFECTS funded by the EU Horizon 2020 research and innovation programme (grant agreement no. 804288).

Idunn Nørbech is a PhD candidate in the Department of Comparative Politics, University of Bergen, and a member of the ERC Starting Grant team CONSULTATIONEFFECTS.