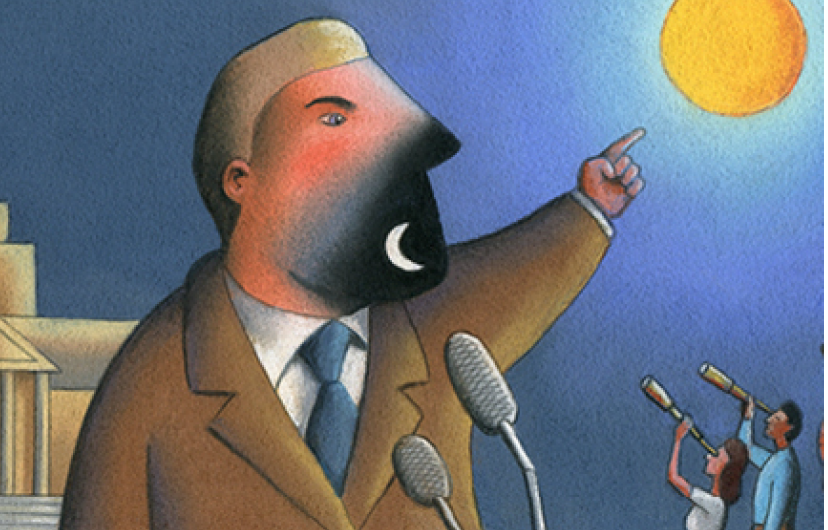 Earlier this year, French voters faced for the second time a final round presidential choice between Emmanuel Macron (En Marche) and the right-wing populist Marine Le Pen (National Rally). Yet in a repeat performance of 2017, Macron soundly defeated Le Pen (58.5% to 41.5%). France thus seems similar to other electoral democracies in western Europe, wherein right-wing populists routinely obtain marginal wins yet are not popular enough to actually capture the executive. Given that scholars often characterise populism’s main threat to liberal democracy as their assault on institutional norms, this state of affairs may seem acceptable – populist campaigns ultimately have a bark greater than their bite.

Yet another pathway through which populist performance can affect democracy remains: the effect of populist campaigns on public support for democracy. We examine this possibility in a recent study, specifically theorising that successful right-wing populist movements – both referendums and political parties – threaten democracy by broadly decreasing satisfaction with democracy among non-populist voters.

We propose two mechanisms that might be responsible for this decline. First, the core of populist messaging suggests that the people have been betrayed by shadowy elites, who have stolen and corrupted democracy. Although this message may not be convincing enough for individuals to vote for the referendum or candidate, it still may have a downstream effect on their attitudes. In other words, individuals may not agree with everything the populist articulates, but may think that they ‘have a point’ in some of their critiques of liberal democracy.

Second, populist campaigns may depress satisfaction with democracy through a ‘psychic shock’, as the populist victory or performance is so alarming that their faith and satisfaction with the system itself declines. In contrast to mainstream party victories (or losses), these populist successes have a profound effect on the existing political order, breaking historical and cultural expectations and representing a rupture with ‘ordinary’ politics. One needs only think of the day after Brexit headlines of prominent newspapers and magazines like the Daily Mirror (‘What the hell happens now?’) or The Times (‘Brexit Earthquake’) to see the profound upheaval that right-wing populist victories can cause.

Regardless of the precise mechanism, we explore our argument that right-wing populist victories will decrease satisfaction with democracy in two of the largest democracies in Europe (the UK and Germany) in the wake of two populist moments: the 2016 Leave campaign in the UK and the 2017 election of the right-wing, populist Alternative for Germany (AfD, Alternative für Deutschland) in Germany. In the case of Brexit, Leave campaigners (such as Nigel Farage and Boris Johnson) consistently employed right-wing populist rhetoric, and the vote for Brexit was most clearly concentrated among supporters of Britain’s pre-eminent populist party, UKIP. In Germany, the party platform of the AfD in 2017 made them one of western Europe’s most populist and nativist parties. 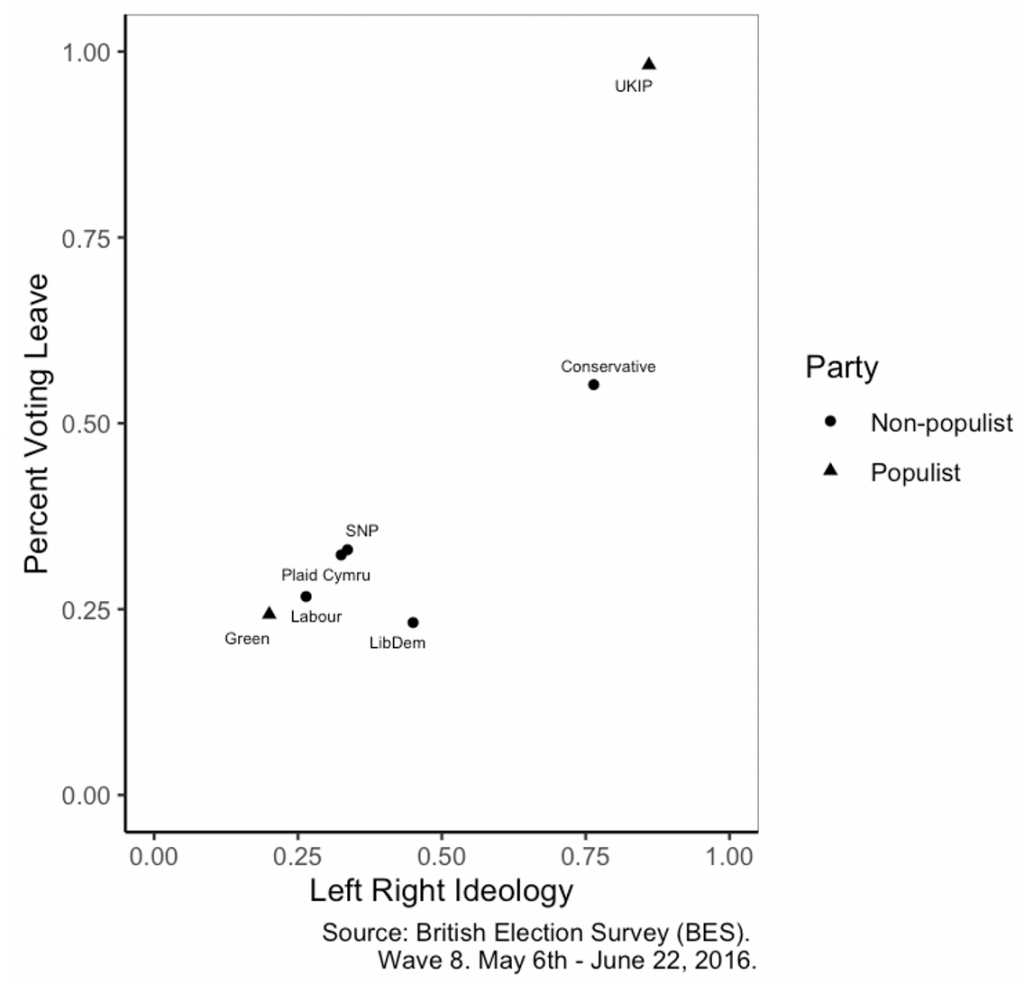 As a first test of our hypothesis, we simply observed democratic satisfaction in periods preceding and following the 2016 referendum among individuals who did not vote to leave the European Union. Specifically, we measured the democratic attitudes of Britons in the months and years before and after the referendum using high quality panel data (the British Election Study). This allowed us to estimate the precise effect that these electoral wins have on everyday citizen’s satisfaction with democracy.

The findings are striking: in the wake of the Brexit referendum, satisfaction with democracy precipitously declined, before rebounding slightly – though well below pre-referendum levels. We argue that this finding provides suggestive evidence that Brexit likely did constitute a psychic shock for Remain voters, who were significantly less satisfied with democracy in Britain after voters severed their link to the EU. 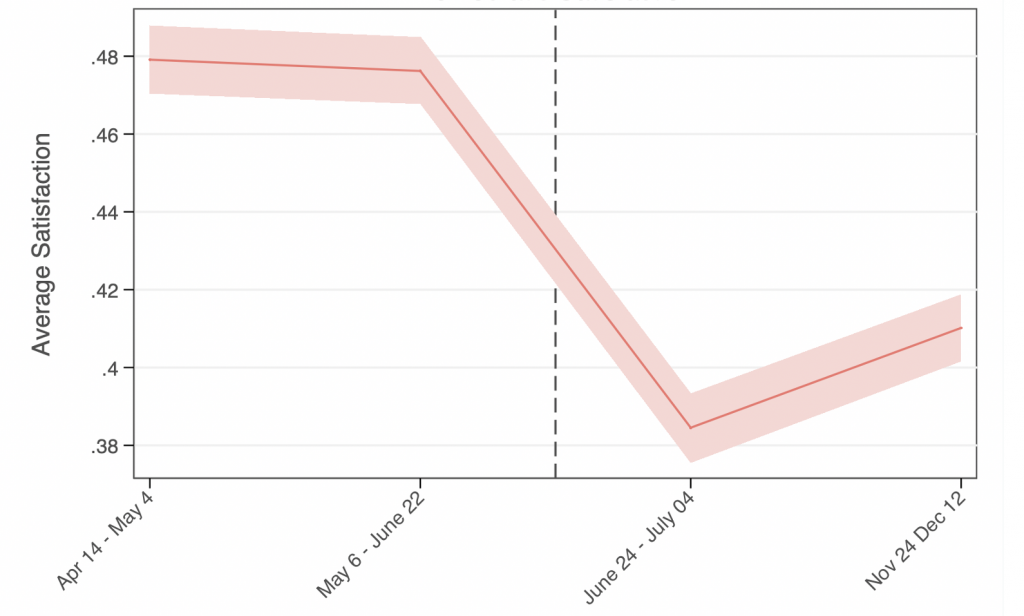 Still, Brexit represents a universal shock – all voters in Britain were exposed to the decision to leave at the same time. This means that we cannot disentangle whether the effect on democratic dissatisfaction is due to a right-wing populist loss, or simply a loss in general. For this, we turn to the German Longitudinal Election Study survey data in Germany.

As the AfD succeeded in some areas and not others in the first-vote, we can measure whether it is simply losing that causes a decline in democratic satisfaction, or whether the effect is unique to losing to right-wing populist candidates. Our basic findings are that populist parties appear uniquely capable of decreasing satisfaction with democracy among non-populists. When right-wing populists win, democratic satisfaction loses.

What should we make of these findings? We argue this suggests an alternate pathway through which populist movements can threaten democracy: by decreasing democratic satisfaction among non-populist voters. When democratic satisfaction declines, voters are more likely to turn to radical and simple solutions to what they perceive as pressing problems. The irony is that the campaigns that promise easy solutions to difficult problems are often those least well-equipped to deal with them, as demonstrated by Britain’s messy and fraught exit from the European Union. Thus, understanding the threat that populists pose is critical if we are to navigate our century of right-wing populism.