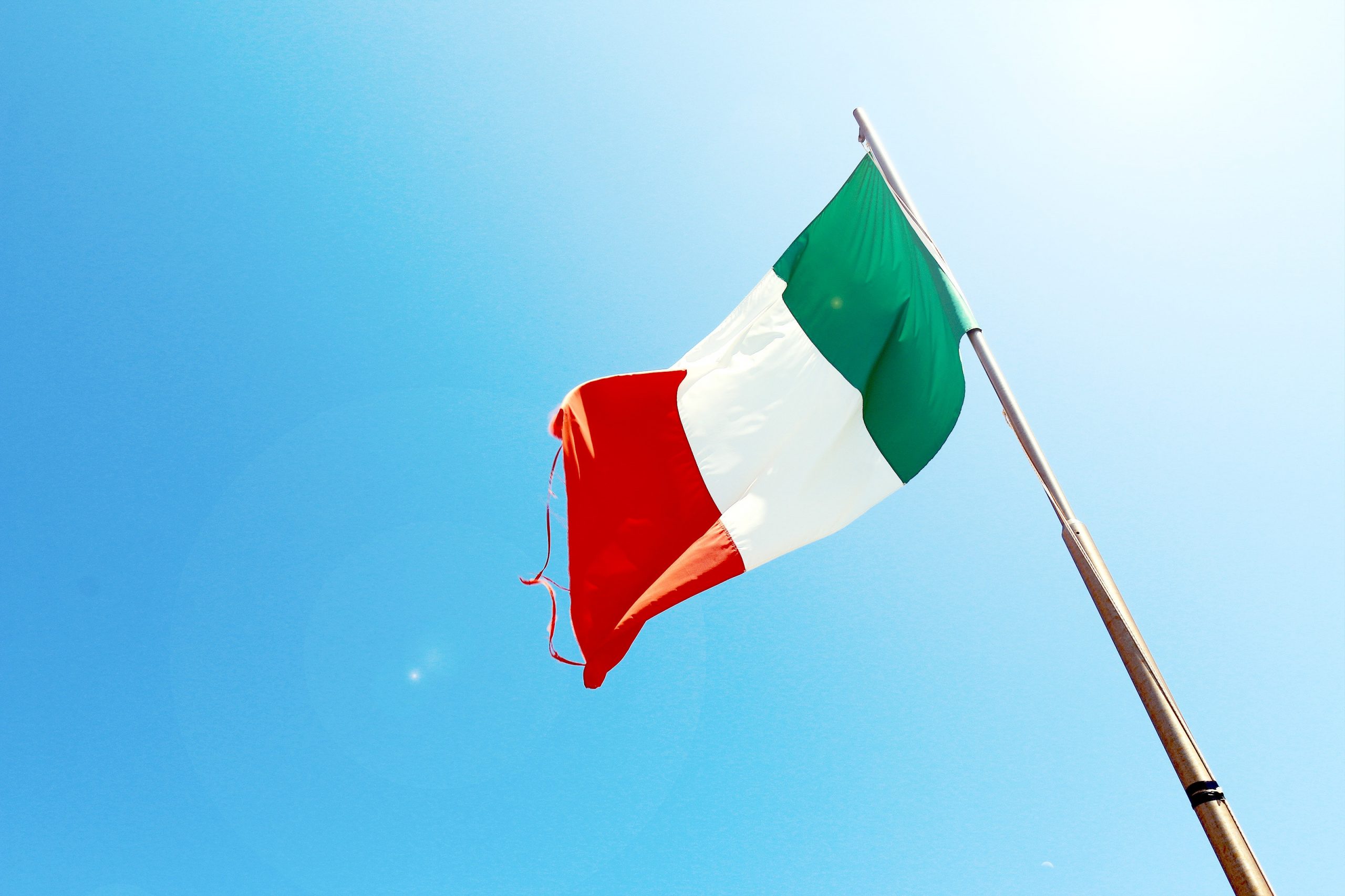 Fratelli d’Italia’s victory in Italy’s general election has been portrayed by some observers as a potential threat to Italian democracy. But little is known about the views of the party’s supporters concerning Italy’s political system. Presenting evidence from an original survey, Lisa Zanotti and Carlos Meléndez examine how the political attitudes of supporters of Fratelli d’Italia compare to those of other Italian parties.

Sunday’s election in Italy was widely anticipated internationally. Scholars and pundits were particularly worried about the consequences of the probable victory of the right-wing coalition, which includes, among others, two far-right parties: the Lega (League) and Fratelli d’Italia (FdI). It was especially the latter that raised concerns given the party’s history as the heir of the National Alliance, which in turn emerged from the neofascist Italian Social Movement.

While the right-wing bloc was long viewed as the most likely winner of the election, the biggest question mark was over the balance of power within the coalition. With Silvio Berlusconi’s Forza Italia far from its past glories, and the Lega experiencing a sustained fall in support over the last few years, Giorgia Meloni’s Fratelli d’Italia appeared to be the main electoral force in the coalition.

The results of the election confirmed these expectations. The right-wing coalition won an absolute majority in both the Chamber of Deputies and the Senate. Fratelli d’Italia obtained 26 percent of the vote, receiving almost 6 million more votes than it did in 2018, while both the Lega and Forza Italia lost support compared to the previous contest.

However, while much ink has been spilled describing the ideological characteristics of Meloni and Fratelli d’Italia, few analyses have focused on the characteristics of the right-wing coalition’s voters. Based on a nationally representative survey of 1,500 Italian citizens aged over eighteen from 14-21 September, we present a first analysis of some of the key ideological considerations of hardcore supporters of the main forces of the right-wing coalition.

Our survey captured assessments of fascism among Italian citizens. We found that around 7.7% of Italians “agree” or “completely agree” with the argument that fascist ideas can contribute in some way to the politics of their country. This proportion increased to 16.3% among individuals that decided to vote for a party in the right-wing coalition (Fratelli d’Italia, Lega or Forza Italia) in the 2022 elections. Among voters for the Five Star Movement and the Democratic Party, these percentages were lower (4.9% and 3.2% respectively). Among those who opted to vote for the coalition formed by Matteo Renzi’s Italia Viva and Azione, the proportion was only around 2%.

Within the right-wing coalition, core Lega supporters were the most likely to agree that fascist ideas can contribute to Italian politics, with 29% of respondents indicating this view. Among loyal followers of Fratelli d’Italia, this figure was 20.5%, while supporters of Berlusconi’s Forza Italia were at 17%. The percentages for followers of these three parties were the highest out of all the Italian parties. Although Giorgia Meloni has articulated a harder right-wing discourse than the leaders of the other two parties, similar numbers of their core supporters share positive assessments of fascism. 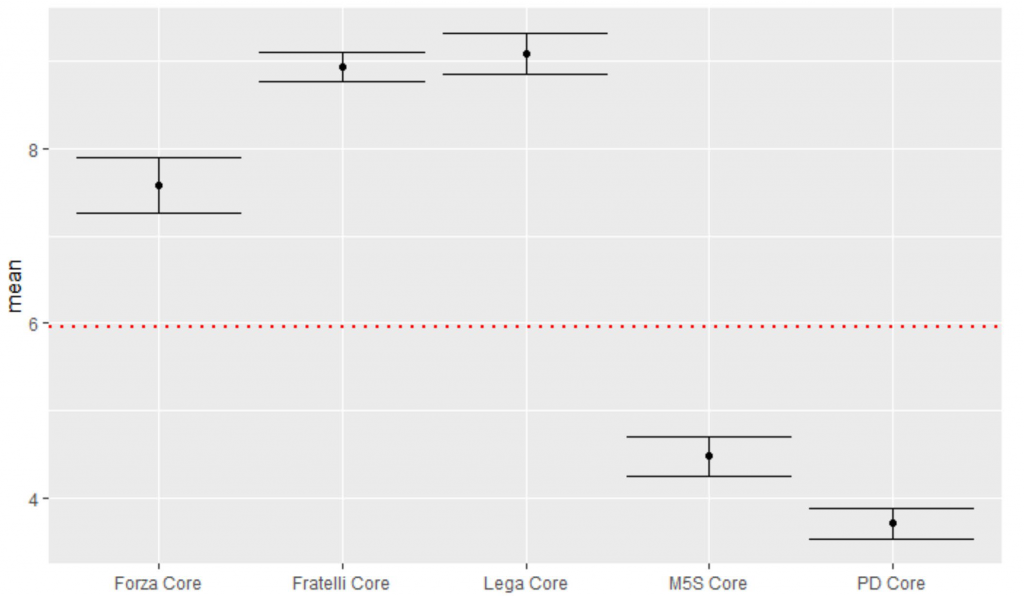 Note: The figure indicates the average scores when ‘core’ supporters of Italian parties were asked to self-position on a left-right ideological scale, with a value of 1 corresponding to ‘extreme left’ and a value of 10 corresponding to ‘extreme right’. ‘Core’ supporters are defined as respondents answering they would definitively vote for a candidate of a specific party for each of the following positions: Eurodeputado, Deputado del Parlamento nazionale, and Sindaco.

Similarly, as Figure 1 above shows, we found that Lega and Fratelli d’Italia supporters gave comparable responses when asked to self-position on the traditional left-right spectrum, where a value of 1 indicates ‘extreme left’ and 10 indicates ‘extreme right’. Lega followers averaged 9.1 in their responses, while Fratelli d’Italia’s supporters averaged 8.9. This suggests that in terms of their general ideological positioning, both parties’ core followers may well be interchangeable. 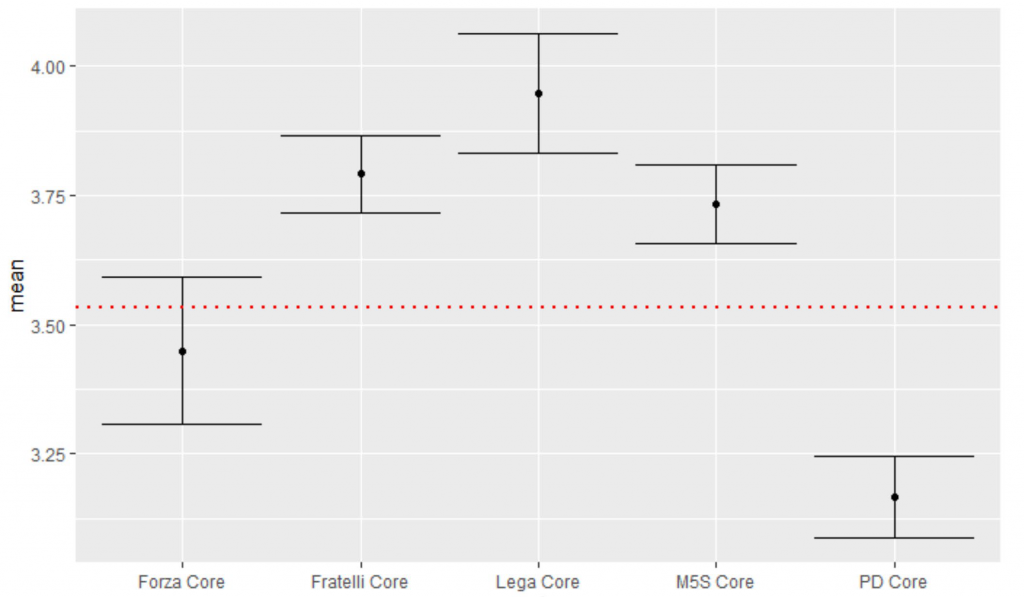 Note: The figure indicates the average scores of ‘core’ supporters of Italian parties on a measure of populist attitudes, with a value of 1 corresponding to ‘least populist’ and a value of 5 corresponding to ‘most populist’. ‘Core’ supporters are defined as respondents answering they would definitively vote for a candidate of a specific party for each of the following positions: Eurodeputado, Deputado del Parlamento nazionale, and Sindaco.

In contrast, as Figure 2 above shows, scores were considerably lower among both Forza Italia and the Democratic Party’s voters. While the Democratic Party has historically adopted non-populist stances, Forza Italia seems to have lost the populist tone of the first 20 years of the Berlusconi era. Meanwhile, the Five Star Movement appears to have returned to its populist roots during this election campaign after the split that led to the formation of Luigi di Maio’s Impegno Civico.

The future of Italian democracy

Two conclusions emerge from this analysis. First, Lega and Fratelli d’Italia’s supporters appear quite similar with respect to their left-right ideology and their assessments of fascism. This reinforces the notion that these two parties are divided by something more than their ideologies. As previous studies have shown, Lega’s drop in support since the last Italian election is closely linked to the party’s clumsy strategy of supporting Mario Draghi’s cabinet while still criticising it from within. The decision to remain in opposition during this period has clearly paid off for Giorgia Meloni and Fratelli d’Italia.

Second, there are reasons to be concerned about the future of Italian democracy. Our survey asked respondents whether they believed democracy is preferable to any other political system. While overall responses were strongly supportive of democracy, with 79% of the national sample considering democracy the best system, among Fratelli d’Italia supporters this fell to just 66%. Lega supporters were even lower at 56%, as were Forza Italia supporters at 59%.

Supporters of the right-wing coalition therefore exhibit more positive assessments of fascism and lower support for democracy than supporters of the other Italian political parties. This combination of sentiments presents obvious cause for concern. While the new government is likely to find its actions constrained to an extent by the inexperience of Meloni’s party and the position of Italy within the European Union, there are several good reasons to be worried about the immediate prospects for Italian democracy.