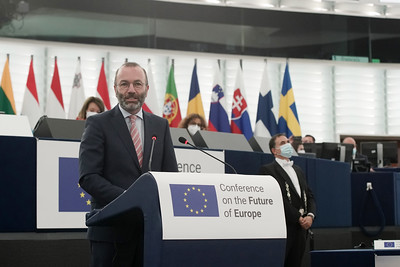 A Tale of Two Cities, the famous novel by Charles Dickens, emphasises the possibility of human and societal resurrection and transformation. However, transformation does not happen without risk or sacrifice. The reader is left wondering whether large-scale political mobilisation and its just and noble causes justify the – often violent – turmoil they create.

Although written as a critical assessment of the 1789 French Revolution, Dickens’ novel offers a framework for contemplating all path-breaking and innovative political ventures. In the EU, the venture that is currently monopolising discussions about democratic governance is the Conference on the Future of Europe, announced at the end of 2019 with the aim of assessing the EU’s future challenges and priorities.

The conference has already generated a series of enthusiastic claims about its capacity to help revive EU democracy. However, overly ambitious early assessments may be misleading or counterproductive. Europe’s political leaders would do well to remember the traumatic experience of the first endeavour of this kind in the EU, the Convention on the Future of Europe launched in 2001.

The conference’s deliberative nature should certainly not be ignored, neither should its potential transformative contribution to the perennial quest for more legitimacy and more democracy in the EU. However, it is important to review the lessons learned from the earlier convention. A deeper reflection on these lessons will, at the very least, maximise the contribution of the conference and help achieve the desired democratic transformation of the EU.

The conference and the convention

The conference includes several components, the first and foremost of which is the conference plenary, consisting of 433 members from the European Parliament, the Council and the Commission, as well as representatives from national parliaments, the European Committee of the Regions, the European Economic and Social Committee, social partners and civil society.

The second component comprises four European Citizens’ Panels, which will form recommendations. These will be submitted to the plenary after deliberation on the thematic areas of the conference. The panels each consist of 200 randomly selected EU citizens. The plenary will discuss the recommendations submitted by the panels and call on EU institutions to act on them. Alongside these two components, there are also Citizens’ Panels formed at the national level, and a digital platform that allows citizens to participate in the process and provides information on events being held.

You would be forgiven for having a sense of déjà vu. Twenty years ago, just after the adoption of the Treaty of Nice in 2001, a similar focus lay at the heart of the so called Laeken Declaration, which announced the decision to convene the Convention on the Future of Europe. Much like the current conference, the aim of the convention was to identify in a democratic and inclusive manner the various challenges the EU was faced with. But aside from the obvious similarities in scope between the two initiatives, what can we learn from the comparison?

One major difference is that the earlier convention did not include European or national citizen panels. It did provide for a ‘forum’ through which civil society organisations could make their views heard, but in reality, deliberation was severely limited and mostly indirect. It is clear that the current conference is envisaged to be much more open to and inclusive of European society, with the goal of providing more opportunities for citizens to get directly involved. A key lesson from the earlier convention is that it will be important to keep this deliberative aspect at the heart of the process and avoid the discussions becoming hijacked by the usual suspects.

The outcome of the convention was the 2003 Draft Constitutional Treaty, which was later rejected in national referendums held in France and the Netherlands in 2005 and was eventually abandoned. Any optimism about the current conference should therefore be tempered by the realisation that such initiatives can also have negative consequences for the integration process. A second lesson is therefore that expectations should be kept realistic throughout.

There are also differences in terms of the expected outcome. More than before, the deliberative journey initiated by the conference could be more important than the actual result. The value of the conference is not so much that it might lead to legislative changes, but rather its capacity to create a space for structured and purposeful discussion among EU citizens, engaging them as equals in debates on key political issues. This is the third lesson, namely that it is important to create a common understanding of what the initiative can provide: that it is not necessarily about new policy outputs but rather new policy processes.

Finally, although the Draft Constitutional Treaty was never ratified, a few of its provisions did survive and found their way into the more modest but politically more feasible Treaty of Lisbon. Thus, putting issues on the agenda and letting them float in the ‘primordial soup’ of extensive discussions and deliberations has an intrinsic value which should not be underestimated. The concept behind the conference is not to recycle the same policy ideas and solutions but instead to bring innovative and thought-provoking approaches by ordinary citizens into the debate on the future of Europe. Regardless of the output, these ideas will remain for future reference. This is the fourth lesson that should be learned from the convention’s earlier experiment.

Learning these four lessons will help to realise the full potential of the conference as a tool for improving the democratic governance of the EU. Much like the events in A Tale of Two Cities, the conference will come with a considerable degree of risk, as the negative outcome from the previous convention demonstrates. But by learning these lessons, these risks can be mitigated, albeit with the caveat that any process which can lead to a meaningful democratic transformation of the EU is never likely to be risk free.

Note: This article gives the views of the authors, not the position of EUROPP – European Politics and Policy or the London School of Economics. Featured image credit: CC BY 4.0: © European Union 2021– Source: EP