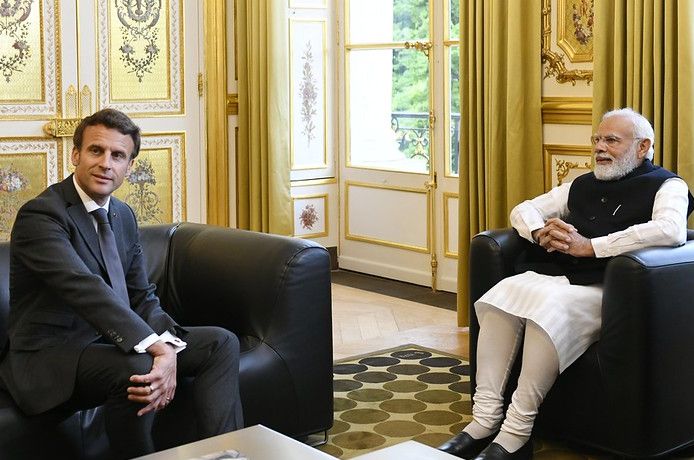 While the war in Ukraine has been the prevailing concern in French foreign policy since February, the Indo-Pacific offers a key window of opportunity for France to take on a wider leadership role within the EU. At the same time, the EU could greatly benefit from this French leadership drive to more intensely engage with a region that is hugely important to global economic growth and is home to around three fifths of the world’s population.

Not only is France the second largest EU Member State, it also has important strategic assets in the region – 93 % of France’s exclusive economic zone is located in the Indo-Pacific,  around 8 000 soldiers are stationed there, and it is home to 1.5 million French citizens.

A window of opportunity for ‘uploading’ French priorities

The EU’s strategy largely reflects France’s priorities but is less ambitious. While it takes up aspects such as connectivity or partnerships with South-East Asian countries, the French strategy is much more precise in the area of hard security. It is thus not surprising that Paris is pushing Brussels to be more ambitious in this area.

The upcoming Maritime Security Strategy could complement the EU’s Indo-Pacific strategy by fleshing out the aspects of maritime security. As with many other EU strategies, this constitutes an opportunity for Member States to ‘upload’ their national priorities to the European level.

Yet, compared to the French strategy, the EU’s version remains rather vague, committing only to explore ‘ways to ensure enhances naval deployments by its Member States’, and drawing on the experiences from the Coordinated Maritime Presence. This has already been identified as a priority area in the EU’s Strategic Compass, and the Maritime Security Strategy might give more precision on this.

Generally in favour of differentiated integration to avoid institutional blockage, France can be expected to push Europeans to make use of these opportunities, and live up to the objectives of the Strategic Compass. In 2021, France, Germany, and the UK simultaneously deployed assets to the Indo-Pacific, and their recent participation in exercises with the Australian air force suggests such engagement with likeminded partners will continue.

Of course, last year’s AUKUS pact sparked a major crisis between Paris and Canberra, putting into question one key pillar of the French Indo-Pacific strategy – the strategic partnership with Australia – and forced Paris to diversify its approach. However, both sides have been working to repair their relations after Australia’s recent change of government.

Furthermore, the new French foreign affairs minister Catherine Colonna’s visit to India in September clearly underlined the importance of the France-India relationship. France has also been establishing trilateral formats of cooperation with India and Australia, as well as Japan and Australia.

These partnerships are key for France’s national approach, but France’s privileged relations with these countries can also serve as a door-opener to the EU. While Paris will maintain its own trilateral formats, this could also directly benefit the EU — for instance when it delegates a CSDP mission to a group of EU Member States involving France. Additionally, these trilateral formats could potentially serve as a blueprint for extending cooperation either to other EU Member States or the UK.

France is the most capable EU partner the US could win in the region. Indeed, the last few months have shown advances in bilateral cooperation, such as the French announcement that it would deploy its aircraft carrier to the Indo-Pacific by 2025, including for joint operations with the US.

A key issue for both sides, however, is France’s understanding of itself as a ‘puissance d’équilibre’, a ‘balancing power’. France affirms that it has allies but refuses to concede that its partners’ adversaries are France’s adversaries. In short, Paris defines its bilateral relations with these countries based solely on French interests. This implies potential strategic divergences in the region – something that is challenging for Washington.

The concept of ‘puissance d’équilibre’ is closely linked to the idea of European sovereignty, which Washington has ambiguous views about. On the one hand, the US endorses the EU’s capability initiatives but on the other, increased EU sovereignty in terms of capabilities also comes with a better ability to make decisions based on European interests.

While Europeans and the US will easily agree on aspects of maritime security related to climate protection, critical infrastructure and freedom of navigation, the very concrete question on how to deal with China will spark divergences among EU Member States.

Finally, a major challenge for transatlantic cooperation is rhetoric in Washington that is strikingly different from European viewpoints over the possible invasion of Taiwan. Over the last few months, the US has regularly reiterated its commitment to defend Taiwan with military means, whereas there is absolutely no appetite for this among the EU Member States… including France.

An option for overcoming these dilemmas is a cross-regional approach and strengthened cooperation on issues where the involved states agree, as well as on the operational front. Once again, France could play a pivotal role.

For example, France has participated in Quad exercises, and, alongside other European states, has been involved in joint exercises and operations in the region. Besides this operational cooperation, a cross-regional diplomatic approach could be beneficial for both sides when it comes to addressing shared concerns.

However, the key to success here is managing expectations and clearly communicating the scope of EU involvement, either based on consensus between the EU27 or on European ‘coalitions of the willing’ that might wish to cooperate with the Quad.

While ‘Europeanising’ its own Indo-Pacific strategy might be promising on broader issues, there are clearly limits when it comes to questions of hard security. Both in Paris and Brussels, full awareness of these divergences is crucial — but if it addressed openly, French leadership of a European push to the Indo-Pacific can only be mutually beneficial for both parties.