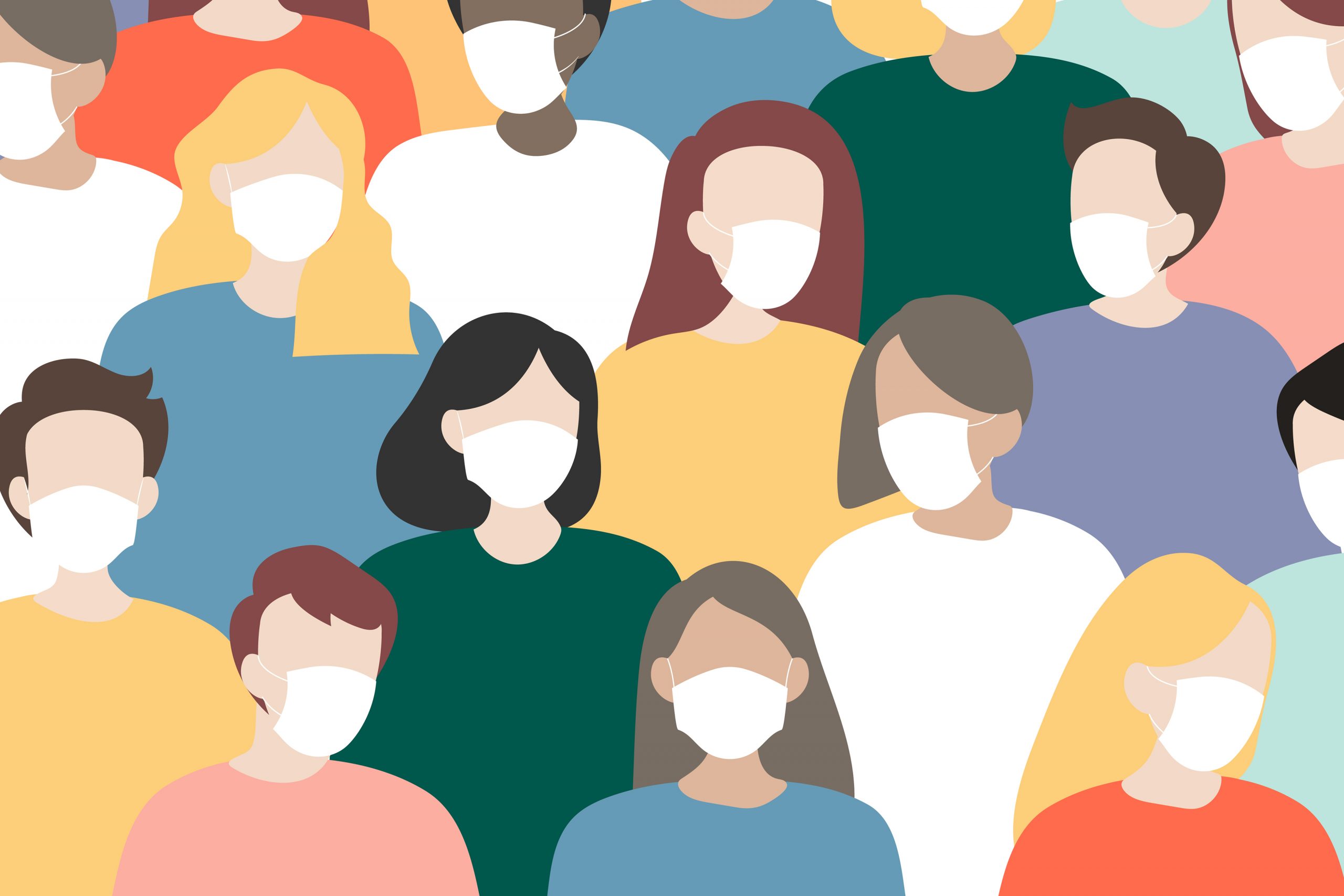 The effectiveness of policy responses to Covid-19 has varied substantially across Europe. Drawing on new research, Timothy Besley and Christopher Dann illustrate how political trust and voluntary compliance have underpinned state capacity and government pandemic responsiveness during the pandemic.

There are two general approaches to building effective states. The first is a ‘top-down’ perspective, whereby government-administered investments into the state’s coercive apparatus fosters compliance by citizens. This has been the primary focus of ‘traditional’ state capacities in academic literature, such as bolstering ‘fiscal capacity’ to raise tax revenues.

The second approach is a more ‘bottom-up’ perspective, envisioning the state as a social contract between citizenry and government. Here, citizens comply with policies if they trust government has their best interests at heart; mutual reciprocity underpins this state-citizen relationship. But these approaches are not mutually exclusive.

Strong norms and values concerning trust and voluntary compliance undergird this bottom-up approach. With regards to Covid-19, in a previous piece we documented broad-brush associations between interpersonal trust and excess mortality p-scores from the World Mortality Dataset. This was based on the logic that for some types of policies, such as lockdowns, trust in other citizens can overcome issues of free-riding – the benefits of the policy are public, but costs are privately incurred.

Yet, trust in the state or confidence in state institutions (sometimes referred to as ‘political trust’), ranging from the government itself to legislatures and the judiciary, are equally as important. Take the vaccine rollout as another Covid-19 policy example. Given this has mostly been a state-administered health intervention, high levels of political trust are necessary to ensure compliance, to mitigate, say, the effect of conspiracy theories versus government-backed, expert advice. Contributions from the literature on vaccine hesitancy unsurprisingly connect trust in government to inoculation willingness. In a newly published report, we probed this set of issues concerning trust and compliance further.

Voluntary compliance towards certain policies is not always easy to measure. But to tease out correlations across countries, micro-data can provide insights into compliance-related norms and values. Using the Integrated Values Survey (IVS), we develop a crude index of compliance based on whether: 1) respondents feel it is unjustifiable to cheat on their taxes, 2) they are willing to fight for their country, and 3) would pay higher taxes to reduce environmental pollution. These are generally actions associated with compliance-based behaviours towards the state. Again, using the IVS, we then develop an index for trust in state institutions by looking at whether respondents have confidence in: 1) government, 2) the justice system, 3) parliament, 4) the police, and 5) the civil service. 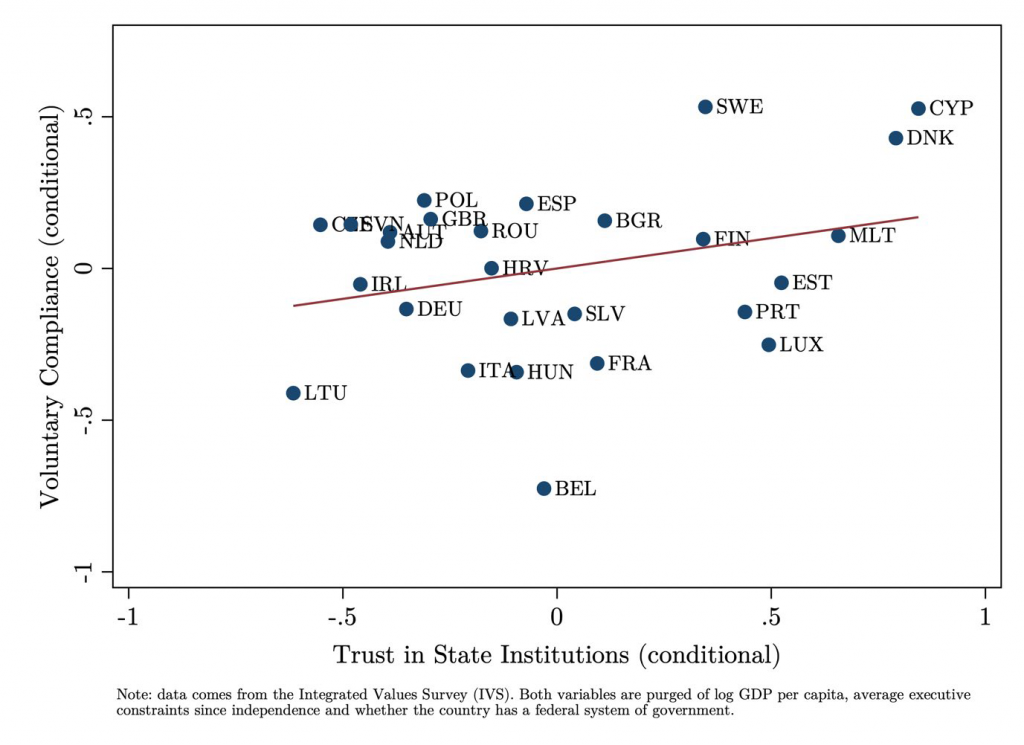 Focusing on the EU-27 plus the UK, Figure 1 shows a positive correlation between trust in state institutions and voluntary compliance. Trust in government matters for compliance because it enhances the legitimacy of policy. Citizens tend to obey the law because they find the law is legitimate, not from fear of sanctions. This logic thus emphasises the important role of private action by individuals in policymaking and expanding state capacity, as driven by norms and values.

The CoronaNet Research Project provides data on the specific Covid-19 policies implemented by governments over the last two years. This includes data on the methods of enforcement – was a policy implemented with some type of mandatory penalty or was compliance purely voluntary? Looking at the proportion of all Covid-19 policies implemented with voluntary compliance measures across the EU-27 and the UK, and correlating this with our compliance index, we again find an intriguing upward sloping association. 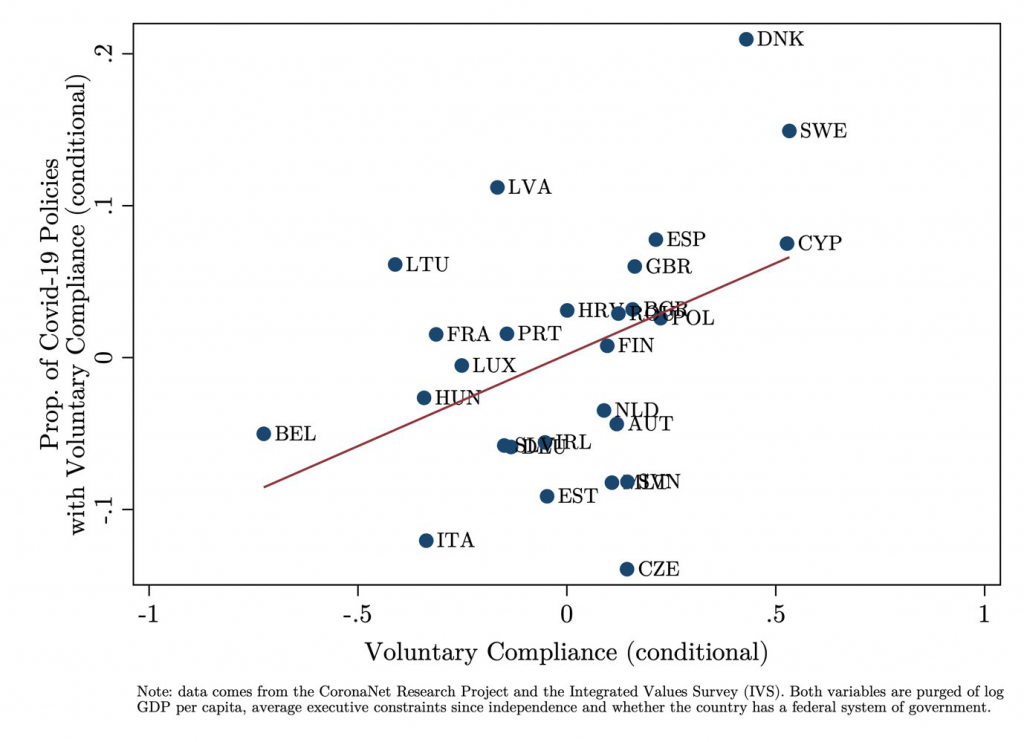 Norms and values can be thought of as national ‘factor endowments’ that play into a government’s policy calculus. Compliance via consent is generally more cost-effective than compulsion through penalties. It stands to reason that effective policy implementation will be incentivised if an incumbent knows there will be high levels of compliance by citizens. Variations in policy should thus be understood in connection to variations in norms and values, as evidenced in Figure 2.

Take Sweden for example. As per the Swedish Corona Commission, the executive summary recognises that “In the spring of 2020, Sweden chose a different path to many other countries, one based on a voluntary approach and personal responsibility than more intrusive measures”. It is therefore not surprising in Figure 2 that Sweden is located in the top-right region of the chart.

Variation between eastern and western Europe is another intriguing application to explore ideas of trust and compliance, in addition to investigating possible origins. Several contributions have outlined the distinctions between countries that experienced some history of communist rule versus those nations to the west of the Iron Curtain. A plausible albeit non-exhaustive channel is that the impact of decades-long dictatorial regimes on civil society has engendered an environment of deep mistrust in the state. This points to the notion that institutional experience is a reasonable driver of norms and values.

In a recently released volume, we probed a sharper test of this argument by comparing bordering regions of eastern and western Europe in the IVS, as Figure 3 outlines. This helps control for a range of unobservable characteristics, such as geography and culture. 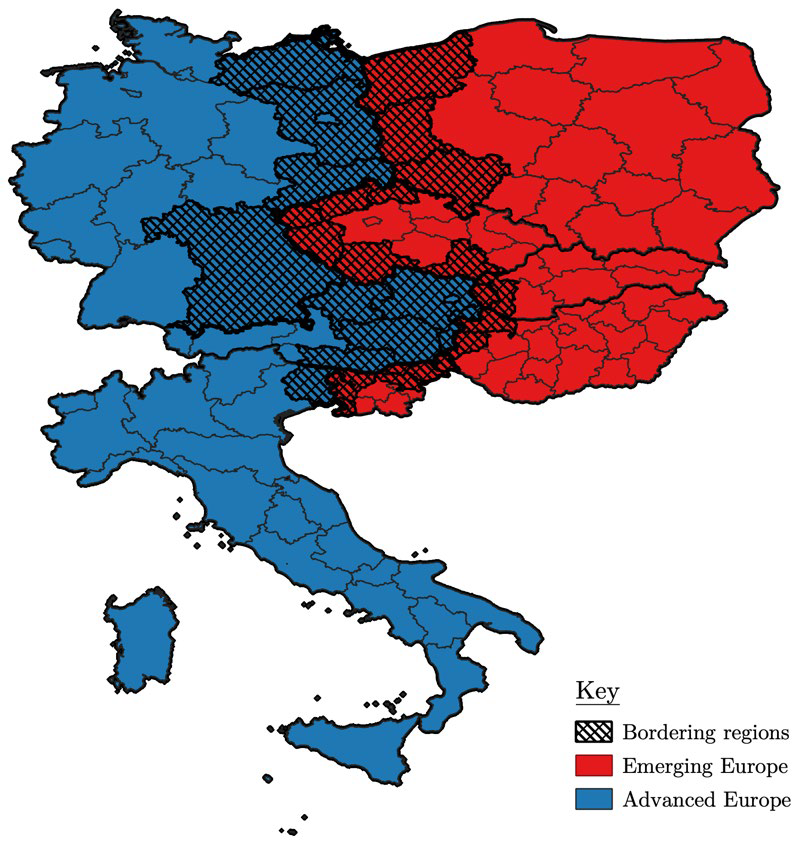 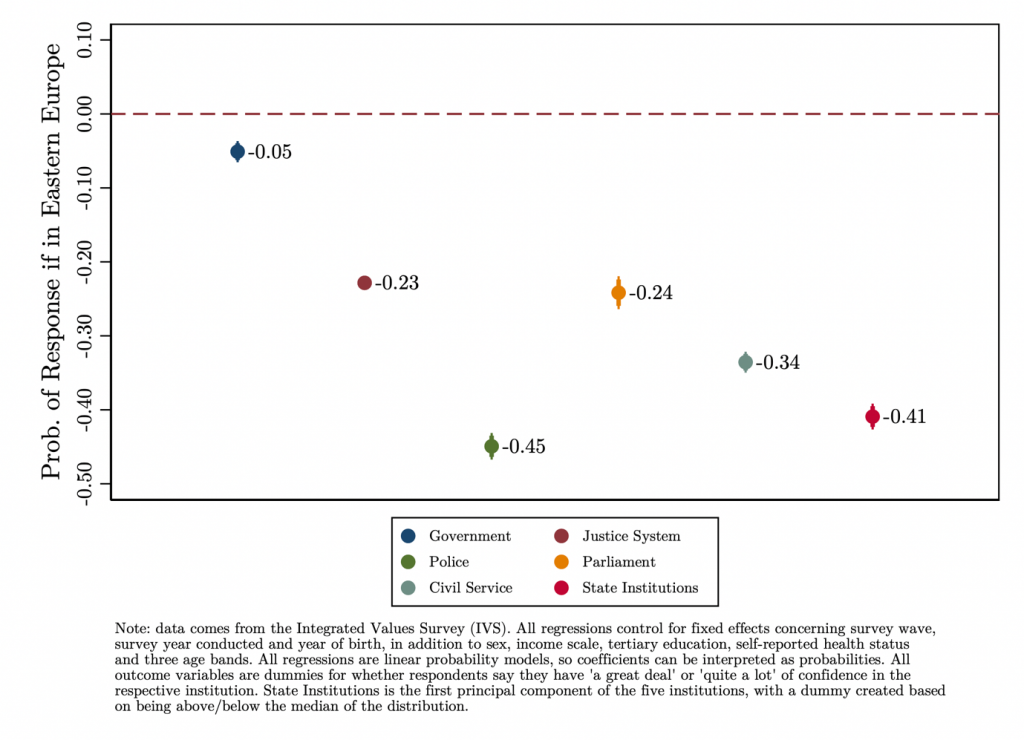 This evidence matters because it suggests larger knock-on effects for compliance. Connected to institutional legacies, and going back to our vaccine example, previous contributions have used survey data to correlate communist experience with vaccine hesitancy (such as here and here). As the FT Editorial Board commented, “collapsed socialist systems bequeathed deep distrust in government and a lack of respect for rules and authorities – providing fertile ground for vaccine scepticism”.

As a final broad-brush pattern in the data, it is hence not completely unexpected that average excess mortality is negatively correlated with our measure of political trust. Figure 5 presents a clear clustering of countries along trust lines, with eastern European countries more towards the lower end of the axis in red, albeit with more heterogeneity amongst western European countries in blue. 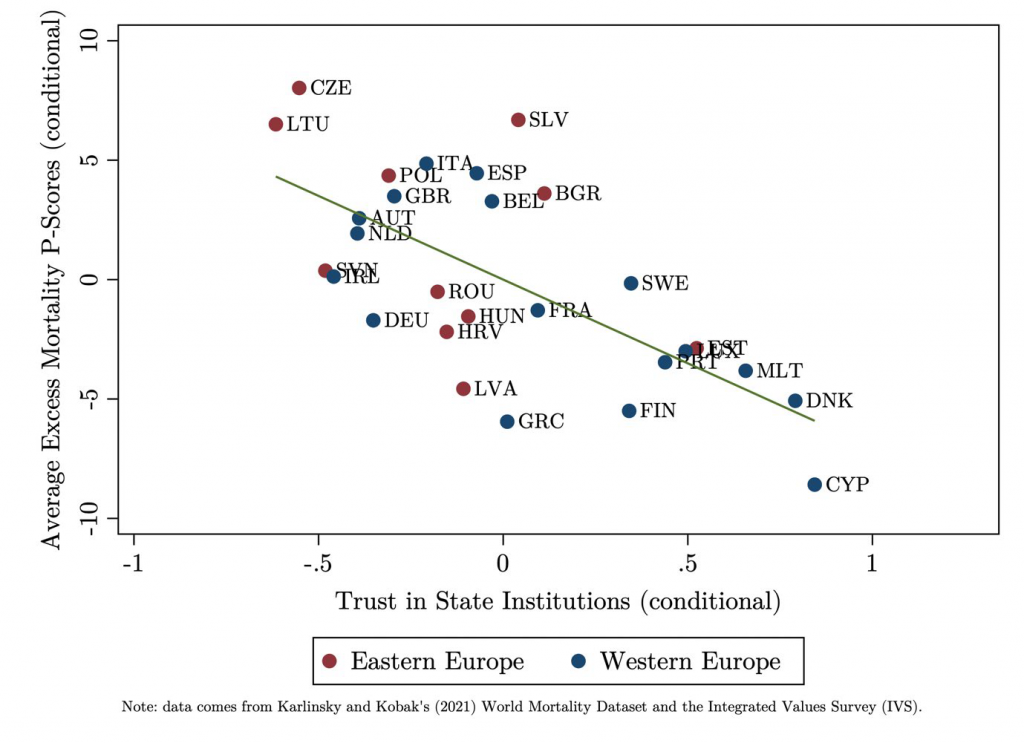 Looking back over the last two years, Covid-19 has been an interesting arena to explore ideas concerning political trust and voluntary compliance in Europe. Notwithstanding evidence stressing the importance of interpersonal trust as a proxy of ‘social capital’ for pandemic outcomes, it is clear political trust plays an equally large role. Trust is a precious commodity; once broken it is not easy to replace, as scandals such as Partygate in the UK elucidate. How countries build trust in their institutions will undoubtedly play a crucial role in future crises to come.