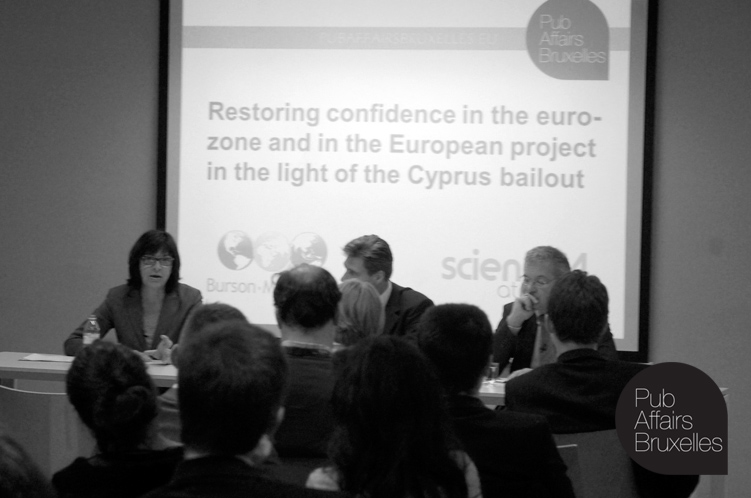 We are most pleased to invite you to participate in an evening of discussion on restoring confidence in the euro-zone and in the European project in the light of the Cyprus bailout on the 14th of May with our distinguished speakers:

The debate will be moderated by Leo Cendrowicz, Brussels correspondent for TIME magazine.

Opinion polls throughout European Members reveal that the European Union has undergone a progressive loss of confidence in its institutions, political setting and economic model. From the beginning of the 2008 economic downturn onwards, these facts have been confirmed by the increase in strident public stances and electoral successes of Eurosceptic parties. The main reasons underlying these phenomena are the imbalances and the consequences of the euro-zone crisis coupled with the persistence of slow growth, rising unemployment and lack of competitiveness in several geographical areas and sectors of the European economy.

These dynamics have once again been put in the spotlight during the Cyprus bailout. Soon after a settlement was reached on the Cyprus issue,The Economist concluded its coverage on the case by remarking that the euro, which “was supposed to be the manifestation of a grand political project”, now resembles “a loveless marriage, in which the cost of breaking up is the only thing keeping the partners together”. Beyond the euro, the persistence of these critical issues has overshadowed the achievements, the possible deepening of the integration process, as well as citizens’ hopes for the continuation of a successful European project.

A comprehensive response of the European Union to this situation is yet to emerge. If the Commission proposal of a “banking union” has been considered as a first step towards a more stable and predictable economic environment, several observers claim that the Cyprus rescue bid has already undermined this initiative and aggravated the gap between central and peripheral economies. In addition, there is still a high level of uncertainty at a political and diplomatic level on the future shape of the European Union: on the one hand, a push towards a more integrated and federal Europe is gaining momentum, while, on the other hand, there are arguments in favor of minor institutional changes and/or more national government involvement.

Are there common solutions on the horizon to overcome this stalemate?

The event will commence with a welcome drink at 7:30pm, followed by a debate at 8:00pm. After the debate there will be an opportunity for questions and discussions. We look forward to seeing you at 7:30 pm on the 14th of May at the Science14 Atrium, Rue de la Science 14-b, Brussels.