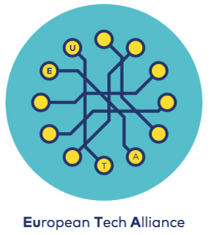 PubAffairsBruxelles was delighted to co-organise with the European Tech Alliance the launch event “INTRODUCING THE EUROPEAN TECH ALLIANCE, European in origin, Global in mindset” on Tuesday the 27th of October at the European Parliament in Strasbourg.

The event was hosted by Catherine Stihler MEP.

NiklasZennström, CEO of Atomico, Co-founder of Skype and European Tech Alliance President gave an introductory speech, while the Vice President of the European Commission for the Digital Single Market, Andrus Ansip, gave the keynote .

A debate between Catherine Stihler MEP, Mr Jörgen Gren, Member of Cabinet of Vice President Ansip and some CEOs and senior executives of the European Tech Alliance member companies followed the Vice-President’s keynote.

We would also like to thank our distinguished guests and the moderator, James Crisp, Deputy news editor at EurActiv.com, for allowing this event to take place.

We hope that all contributors, attendees, as well as our present and future members will join us in our future events.

#Davos2023: Davos man must pay. The many political and business leaders attending these gatherings are indeed in a position to take concrete steps toward cooperation and change, writes @Jayati1609 | Project Syndicate

Jayati Ghosh calls on participants of the World Economic Forum's annual meeting to support raising taxes on the super-rich.

US lawmakers in Davos tell Europeans: America’s not protectionist